Well, the extension request went out with an estimate and a check, so that's done. I got the last estimated, looked it over, decided it fit within previous guesstimate and gave R. the go-ahead to mail the prepped envelope.

Since T. has a new van driver and fewer people on his van, he now gets home reliably enough that I don't have to pick him up Mondays and Wednesdays to make it on time to swimming and gymnastics, respectively (altho swimming also moved later taking most of the pressure off anyway). We no longer stop at the Littleton Starbucks and instead are stopping at the Acton Starbucks after gymnastics. I also contemplated just how much I enjoyed the single short soy mocha no whip vs. drip coffee and started ordering a short regular coffee instead -- cheaper, which for me is not particularly relevant, and, as near as I can tell, without calories (altho because it is caffeinated, obvs not without other health impacts).

One of the notable results of this change (the money and the calories I'm sure were spent elsewhere) is that I want to take a nap pretty much as soon as that coffee is in me. Which is weird. From when I first started drinking coffee (embarrassingly early), until sometime in my 20s, I _always_ wanted to take a nap after I had a cup of black coffee. That phenomenon came back recently (no, I don't know why either, altho I have a handful of theories, ranging from Goddess Only Knows What Hormones Are Doing to Me These Days to maybe I've finally gotten back in good enough shape for the caffeine-blood sugar interaction to return to my youth. *shrug*), which is fine (the kids are old enough that if I decide to fall asleep on the couch for 20 minutes, nothing really bad is likely to happen and they aren't mean to me while I'm asleep, so that's cool). But once I'm _up_ from the nap, I am _up_ from the nap.

Today, I used that burst of energy to clean the fridge. Just to give you a range on how long it has been since I felt like doing that, I found some frozen salmon in the freezer with a date on it from _before_ we moved into this house. It's not _quite_ as old as my youngest child, but it's within a few months. There was cool whip in the freezer that no one is ever going to eat. Freezer burned berries and bread products. Truly ancient frozen peas and onions. Edamame bought on a whim in the fridge, past the sell by date, unopened and the top bulging. Molding lemon. An empty -- but not clean -- butter dish. Things went into the compost, the trash, and the dishwasher, as needed. This project was _much_ easier than it would have been a couple months ago, because I finally started cooking meat again. Thus, a lot of the Costco frozen meat back stock had been consumed already and we knew what was left (that was all in the chest freezer and wasn't as old as the aforementioned salmon).

I took the shelves out of the left side door and actually _washed_ them, however, I'm not sure I've got enough caffeine left to do the rest. I'm thinking about it, tho.

Before and after photos (click on the photo to navigate an album of 6 photos at Flickr. There's a risk, if you come to this album after the date this was posted, that there will be a lot more than 6 photos in it. If so, the oldest ones are the ones of this project. I _never_ remember to take before and after photos and I almost always wish I had): 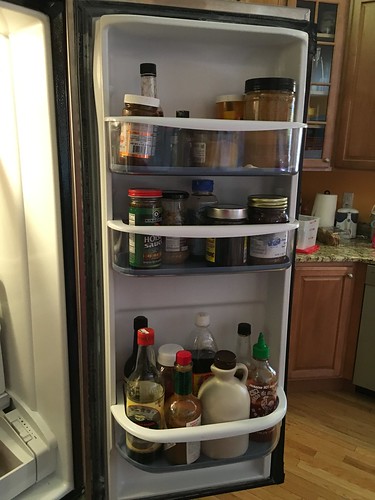 I'm trying to figure out if it is possible to set a reminder/alarm on either the Echo or an iOS device with Siri, where Siri or Alexa will, at a predetermined time, tell you to do something in her out loud voice. So, rather than emit a tone or wtf at 9:15 to remind me to brush my teeth, Alexa would say, "Walkitout, it is 9:15, time to brush your teeth" or whatever I told it to.

I can see some drawbacks to this feature (endless pranking of Siri and Alexa to, say, emit a fart sound timed to be when other people were around but you weren't, have Siri cuss you out during a meeting, etc.), so if it doesn't exist, all right. But does it exist? I can't seem to make it happen.
Collapse