It's a better than average explanation of the scandal, in that it contextualizes the timing with a change in the regulatory environment. Basically, VW cheated, rather than comply with a new, lower standard.

"In 2007, EPA reduced the upper limit of nitrogen oxide (NOx) emissions as part of its Tier 2 emissions program to address air pollution from passenger vehicles. Coincident with this, Volkswagen suspended sales of its diesel passenger vehicles, which could not comply with these standards that now forced diesel vehicles to be just as clean as their gasoline counterparts.

By 2009, however, the turbodiesels were reintroduced by Volkswagen—apparently under false pretenses. Volkswagen (under vehicles sold under both the VW and Audi brands) implemented software in the emissions controls package that only fully turned the emissions control systems on when the car was being smog-tested. This allowed it to pass emissions tests—but during normal driving conditions the vehicles continued to emit smog-forming pollutants at pre-Tier II levels, which were 10-40 times higher than required by law."

So while I _thought_ that buying a pre-2009 VW diesel would get you clear of the problem, it only gets you clear of the cheating by moving you back to an era of looser regulation. Tough times for diesel car owners who wanted to save a little money at the pump and maybe help the environment a smidge.

I was raised a Jehovah's Witness. My mother was born into a Holdeman Mennonite community. Trust me when I say, my immediate familial heritage is more anti-abortion than you would readily believe. These are groups which do NOT recognize an exemption for the life of the mother, rape, incest or anything else.

When I was 25, for a variety of reasons which are out of scope of this blog post, I gave up on being a JW, and with it, I gave up having parents or my two older sisters (and I got _back_ my younger sister, and I liked her better anyway). I have been slowly rebuilding a family out of close friends, extended family, and of course my husband and children in the ensuing two decades. Part of rebuilding a family has involved researching my family through public records. A year or so ago, I got death records for many of my extended family who died in Washington State over the last hundred years, give or take.

I've blogged before how I cried, how I had to take breaks, as I learned more about the tragedies that shaped my family through reading public records than I ever managed to extract from the people who were more directly affected by them than me. But there is one that stands out every time Planned Parenthood, reproductive rights, etc. are in the news. It is this one: 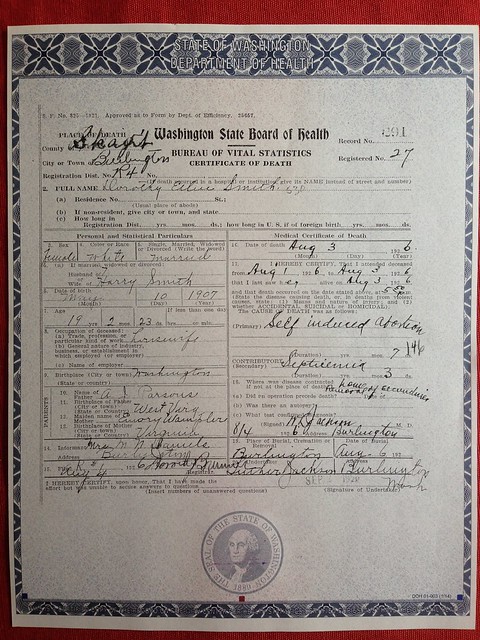 There was a substantial age difference between Mr. Smith and Mrs. Smith (he was, obvs, much older). And they already had a child together who, when this happened, was 3 years old. She grew up to be, by all accounts, a strong and wonderful person who married a man she loved and they had three children and many grandchildren and while I only barely know the family from a great distance bridged only weakly by facebook, growing up without her mother and being bounced from one home to another before finally settling into a good place with people who loved and supported her, made her very reluctant to talk about any of this.

What a different life that child would have had, if her mother had had better choices available to her than this one. Let's not go back to that horrifying world, which seems to my eyes so recent (1926!). It's tough enough for a woman to have a 3 year old child at age 19, but to then have so few choices about whether she had to have a second at age 19, that this seemed like the best of them is distant from the minds of every centrist who thinks that they would never have an abortion, so really, why do we need Planned Parenthood when everyone can just use birth control? And yet there are still young women (girls!) who find themselves in similar situations. Today, they can order cytotec or whatever over the internet, but they still die of infection and septicemia, if they don't have access to doctors or are afraid to tell them what they've done.

Picked up: Photographs of my children!

Dropped off: And then I promptly delivered two triptypchs to the frame shop to be framed and bought a frame for another one. I'll put the digital prints up on Flickr later tonight. Maybe. Clothing went to Middle Class Guilt Reduction Station down the road. Four (4) kick scooters found a new life at the preschool both my kids attended. _The Cellist of Sarajevo_ (which I did not finish and which I in no way enjoyed) was returned to Concord library.

Still to be taken care of: I bought some clothes at Kohl's yesterday after dinner and before book group and the checker failed to remove a security tag. *sigh* Since I don't really have any reason to go up to exit 6, I'm going to see if I can go over to the one in Burlington and have the tag removed there; I'll be picking up a cake at a Wegman's in the area for Saturday some time later this week so maybe I can combine trips.

I'm feeling pretty good about today's decluttering, because I got rid of 4 scooters and the clothing in/clothing out over the last 24 hours are basically a wash.

So, a self-identified "car guy" wanted to chat about my car today when I was headed to the framers with pictures. This is a perfectly enjoyable way for me to waste time so we talked for awhile. Among other things, he described a Tesla robot charger, that he described -- repeatedly -- as creepy looking/acting. Here is LiveScience's description:

Now, when I heard about it (and again after reading about it), I _immediately_ thought of a few occasions when I yelled at my husband for borrowing my car, running an errand and then _not_ plugging it into the charger overnight, leaving me in the morning with the half or less charge on a day when I intended to run errands. In practice, it has never mattered because range anxiety is exactly that: anxiety, not necessarily based in probable outcomes, but the most negative possible outcomes.

And while it may strike some people as "creepy", it mostly strikes me as an awesome way to avoid an entire category of Oh Goddess How Could I Be That Stupid errors, as well as preventing the above mentioned marital argument.
Collapse