And it was a half day. In theory, I was going to have two sitters and R. and I were going to go out to dinner. But the one who volunteered to work then changed her mind in favor of packing for the trip she is taking that will cover the entire time the kids are out of school (between regular school and their summer program). *sigh*

A. has school through her half day on Thursday, but you'd never know it by her backpack, which vomited up way more than the usual amount of paper ... stuff.

She demanded "rocket math", which is Mathmateer on iOS, and which we got for T. when he was in kindergarten. I assume they've started using it in school. We have some placemats with addition math facts, but apparently I resisted the temptation to buy the times table one. Silly me. But then I thought, this is a girl who owns two pink calculators. So I showed her how to input the multiplication questions into the calculator. Seems like a valid life skill, altho I have no idea whether this is acceptable in a school context or not.

So I got this great email today, with a mystery to be solved! The mystery had language and decorative arts elements.

Here are the pictures that were in the email: 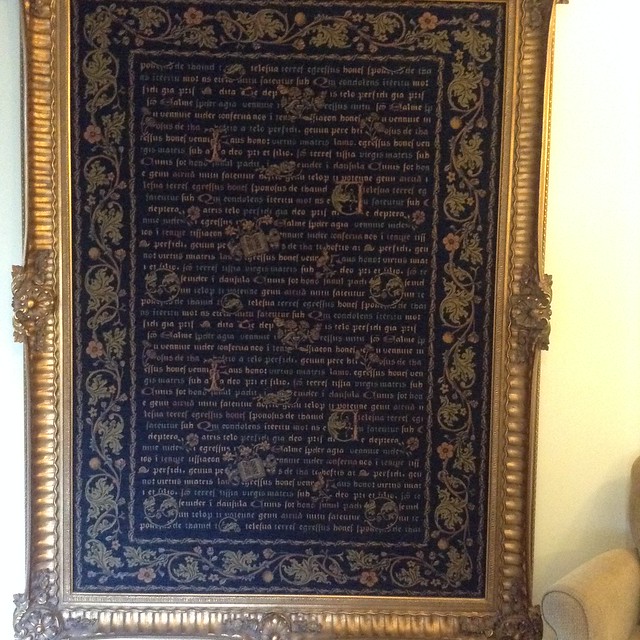 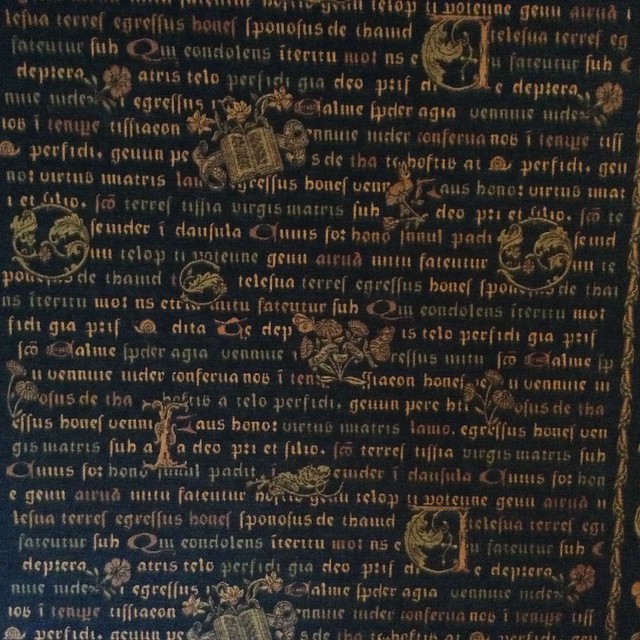 Here is the background: we think the language might be some form of Latin, but would like to know more about the language. The person who asked the question notes that the text repeats and so the assumption was that it was a song or poetry.

Here is what I believe the text of the wall hanging is _from_:

It is from a very old hymn, part of the liturgy.

But I think that the wall hanging itself looks like it was machine made (because the object is in Australia, I haven't seen it -- just those two pictures). And the text in the hanging is neither complete nor, to be entirely honest, accurate.

So: any theories out there on why the text is partial? This hymn in some variations was sung faux bourdon (not _originally_, obvs!), so maybe one of my readers has encountered it sung in a round or round-like way during their time in a choir? Have you ever seen a wall hanging like this? The _oldest_ I can imagine it being would be some sort of late arts-and-crafts 19th century/early 20th century thing, but if anyone has seen any similar looking wall hanging (tapestry, etc.), I'd be curious to know what they've seen and where.

We have what I believe is a definitive answer on the language question, at any rate, but I'm still curious about just what this is and why it came to be (in Australia, no less!).
Collapse