Build a pair of buildings and make one reflect light into where the shade cast by the other would otherwise be. Clever!

The other problem, obvs, is wind tunnels.

As near as I can tell, this is the issue that causes my phone to have worse battery life at WDW than anywhere else I go. Hopefully it will start to improve over time.

I've been thinking about baking bread on and off for months now and seeing a long-ish article about baking in an anti-gluten era (http://www.newyorker.com/magazine/2014/11/03/grain, h/t D.N. who posted it to FB for her brother) caused me to go, hmmm. Today is Sunday. Sunday is a Good Day for baking bread. At the time, I thought my son's therapeutic riding would be canceled, but the weather improved so we left after I pulled it out of the oven. R. extracted it from its dish.

Here are the photos, followed by a discussion of What I Did and What Happened. 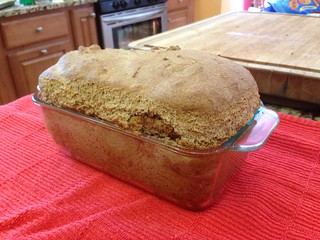 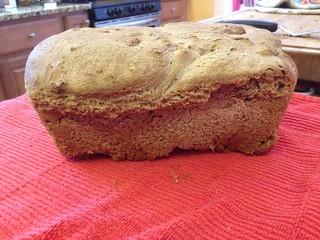 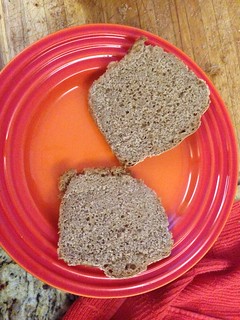 What I did: I took 4 Cups of hard red wheat berries (Eden, but I bought them before they started that lawsuit, I swear, and when my soft white ran out I replaced it with Palouse brand) and ran them through the Nutrimill. I did not _quite_ use all of the wheat, altho I couldn't tell you just how much was left over and if you have any sense at all, you don't care.

I pulled the yeast out of the freezer and proofed 1 Tbsp in 2 Cup blood-warm (did not get the thermometer out at this point) water (that is, water that you sort of can't tell what the temperature is because it isn't cold or hot against your skin).

I added 2 Cups of the whole wheat flour to the water and yeast, and put the bowl under the stand mixer using the dough hook. I ran it at a fairly low speed for a few minutes, stopped it, added another 2 Cups of the whole wheat flour, some sea salt and a couple Tablespoons of honey. Ran the mixer some more. Used a silicone spatula to scrape the sides of the bowl, added a little more flour and watched some shape start to form. Added some olive oil, a bit more flour, ran it just a bit longer (I swear, I will take some video next time). I wasn't going for a kneadable ball, but I wanted something with more shape than batter. Once it held shape, I scraped it off the hook, patted it into a good form with the silicone spatula, covered it with a plate and let it sit for 45 minutes.

I then put it into a glass loaf pan which I had poured olive oil into. THIS WAS AN ERROR. As the loaf baked, it pushed the oil up the sides (yay! That's why it didn't stick much, even without the lecithin) and over the edge (boo! oven fire and tons of smoke. And fire alarms. *sigh*). Next time, make sure there is oil to coat and remove the rest. This is the first time I got the loaf size right and the oven spring right to actually thoroughly clear the top of the pan. Ah well.

Ah. I DID NOT PUSH DOWN THE DOUGH/BATTER/WTF. I just moved it with the spatula from the bowl into the dish, and then I put the dish into the cold/room temperature oven and let it sit there for another 20 minutes or thereabouts. Then I started the oven at 350. We have natural gas to the house, so the oven heats relatively quickly vs. an electric oven. I baked the loaf for an hour, from when I turned it on, and it go to 203 degrees internal temperature so if I had it to do over again I'd probably pull it out a few minutes earlier but it's a tough call. Also, efforts to manage the smoking oil problem resulted in the door being opened repeatedly. Sad face.

There are some small holes in the loaf (bigger than the ones evenly distributed throughout the loaf) that are clearly an artifact of the way I moved the dough from the bowl to the loaf pan. I will do this a little more carefully next time. R. thinks the bread could use a little more salt. That is almost certainly true. It appears to have enough strength to make a sandwich out of.

ETA: If I were reading this, I'd be going, so, yeast type/brand? Red Star active dry, production date June 2006 best if used by June of 2008, stored in the freezer. I think R. bought it at Costco.

Don't be thinking it's hippie heaven over here, just because we had tofu chocolate pie and there's whole wheat bread sitting on the cutting board. That pie had an Oreo TM crust and the bread involved two rounds of machinery to produce it.
Collapse