I failed to blog at all for 133 days in 2014, about a third of the days.
For comparison, I failed to block for 130 days in 2013. I miss a lot of days in December, with November and June being weak as well. I know why: vacation, school holidays. The news cycle goes into abeyance and I am often busy traveling as well.

I blogged the least in December 2014. I blogged the most in March 2014. In 2013, the least was December and the most was February. There was a big snowstorm in February and we did not travel that school break so I was sitting around blogging.

I'm debating doing some word count analysis, and balking at the idea. None of this counts comments, and it is LJ specific (so if I posted over on FB, it isn't part of this).

I had expected the travel effect to be stronger, but in practice, I tend to do a lot of catch-up posts after at trip, so travel shows up in no-blogging days, but not really in the monthly total.

I wore my ice bugs both times, and was glad to do so. We did a little bit more off the trail today and got to walk across a red oak swamp that was frozen and super cool. Parts of the ice were transparent, so you could see layers of leaves and things underneath. And the little rocks in the swamp had all kinds of stuff growing on them that made them look like little fairy islands.

It's good to be back in the woods again. R. and I tried last week on Great Hill, but I didn't have the ice bugs on and it was way, way too slippery. 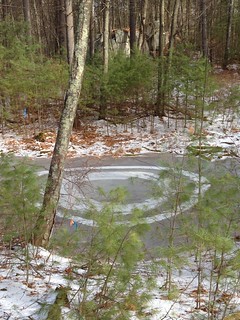 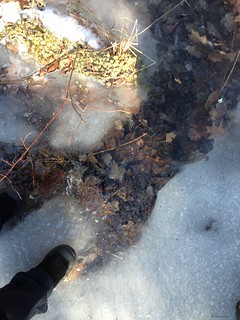 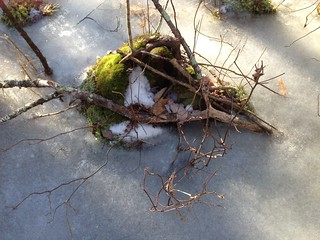 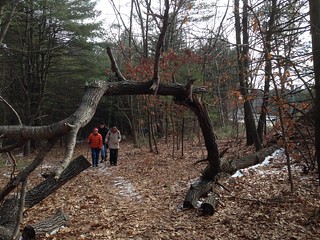 
The question: What is the best time of day to exercise, if my goal is weight loss?
The answer: Before breakfast.

The evidence: a study of overfed Belgian men in 2010.

"researchers in Belgium persuaded young, healthy men to stuff themselves for six weeks with a diet consisting of 30 percent more calories and 50 percent more fat than the men had been eating."

Was not kidding about the overfed. Meant that literally.

So obvs, a bunch of these guys gained weight.

"But the men who had exercised first thing in the morning, before eating anything, had gained almost no weight and retained healthy insulin levels. Their bodies were also burning more fat throughout the day than were the other men."

What was going on here? Okay, well, if you overeat by that much, YOU DO NOT WAKE UP HUNGRY. You may well wake up kind of uncomfortable. You can blow through this, eat, carry on about your day, etc., but you don't wake up hungry. (If you never wake up hungry, you might seriously think about WHY you never wake up hungry. And whether you, like these young Belgians, might be eating a bit more than you should.) I can readily imagine that blowing through that residual blood sugar would really help with a lot of things.

But suggesting this as a tactic for someone who is weight stable (and thus _not_ overeating for their size/shape/activity level) isn't necessarily going to work the same way. You take a hungry person who just woke up and send them out to exercise vigorously, and you should probably expect a higher rate of injuries and accidents.
Collapse