I booked the kids a half day day camp for this morning. Of course, that means everything immediately starts getting weird. One kid peed in the bed in the morning and pooped in pants in the evening then had the runs the next morning, which imodium fixed. The other kid starts howling whenever wiped but NOT while peeing, so no reason to believe UTI. I suspect a microtear because that has happened before. In any event, they both went to camp, where I promptly totally forgot to pay but did remember to drop off the immunization paperwork. I had a lovely breakfast out with my friend A., stopped in Littleton to drop off some stuff for consignment (yay for putting it in the trunk the day before, for one item and a few days before for the other!), then returned to the gym to pay. Then off to the mall to meet the kids and their sitter for a genius bar appointment (long story, but I've figured out why people won't go to the genius bar when I tell them to: they never have so they don't know how. So I just booked it for her and made her come along. I'm good with the social pressure thing and she seemed grateful). Alas, at the mall, one of the kids decided to go with me but I forgot to get the booster seat. We lunched at Rainforest Cafe (how can my kid stand this place? It is massively overstimulating. I think my husband would have a heart attack in there), then tried to exit the mall, but the kid saw Build-a-Bear. $65 (after $10 rewards card -- how is it that other people get two bears and accessories out of what we wind up spending on a single bear? Of course ours seem to always be licensed product, which may explain it. Also, I tend to pick out additional accessories, because I'm a pusher that way) later, we were in Macy's on the second floor trying to take the escalator down. I had hoped to exchange some stuff but between the kid flipping out about the escalator and me needing to pee, we just left instead.

And then things got bad. Where's my binky? Where's my car seat? Sitter never called back from the message a couple hours earlier, so I wound up yelling at my kid and then there's crying and binky! Seat! So we call the sitter, arrange to meet in Concord, and we wait there watching my other kid's cell phone via Find My Friends. While the sitter was there, I got to run to the bathroom (whew!) and then we finally went home, solidly 2+ hours later than I had originally planned and NOT having run one of the errands. So, win some, lose some. I'll probably go back alone tomorrow.

In good news, the kid _really_ wants to keep using her booster seat. She's also really good about letting us know when we have forgotten to belt her in.

I've been through many, many iterations of organizing chargers for travel. We've got a fairly small (altho still heavy) power strip/surge protector. We have all kinds of cords, obvs. I've bought various small, nylon containers for keeping stuff in one place and not all tangled up. The results have been variable and I am forced to constantly adapt to replacement gadgetry. This likely sounds familiar to you.

For the first time since my second kid (possibly since my first kid, but I'm less sure of that) was born, I'm contemplating getting on a plane without checking a bag, which means the incentive to lightweight has really returned to my life -- it was in abeyance because extra heads give extra baggage allowance and rolling bags and luggage carts mean I can actually get away with bringing more luggage. But if it's all going on my back, things change.

There have been a bunch of components to this (and so far, I'm only attempting this for a short, warm season trip so I don't have to deal with clothing bulk), one of which involved the chargers. As I was looking for a full set of spare charging cords and bases, so I wouldn't _forget_ to bring the chargers (I also seem to forget something), it occurred to me I could fix this with product. Because, you know, gadget budget = more money than sense.

3 cords, of which I only needed 2 so not quite as economical as it would be if I needed all 3:

And a picture (the stray lightning connector would attach to the phone that I used to take the picture): 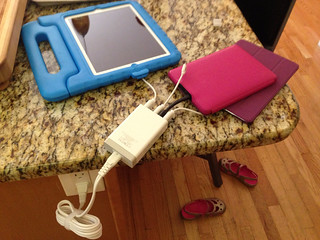 You can find it. Feel free.

Start by reading the cross-tabs. Go ahead. I'll wait.

You'll need something that will load a spreadsheet because, cross tabs.

You'll notice that they asked everyone the 6 year olds allowed to play unsupervised at public parks question.

"In your opinion, should parents be allowed to let their [6 year old children] play at public parks unsupervised? Or should the law require they be supervised at public parks?"

That really sounds like a public parks rule (thou shalt not litter or take plant cuttings or vandalize the loo or whatever), rather than a law-law, like, don't take stuff that isn't yours. Not that health department rules about wearing shoes where food is served can be scoffed at.

They took the "no" respondents and asked them 9 years? And no respondents again asked 12 years. If you multiple the nos together, the actual response would be forty some odd percent think 12 year olds should be subject to a rule saying must be supervised at public parks. NOT "A whopping 83 percent of Americans think there should be a law that prohibits kids 9 and under from playing at the park unsupervised,", which Reason then published and everyone merrily repeated without bothering to look at the crosstabs to notice that, hey, surprised? No? Libertarians lie. Especially when they are funded by Koch brothers.

Now, I bothered to do the multiplication to get the forty odd percent, but it turns they didn't get their "83%" even on the 12 year old question. That was 63% in favor of supervision. But again, that was a heavily reduced sample.

Clearly, this is motivated. No one uses the first sentence to lie about an already heavily misleading question response if they aren't motivated. R. thinks libertarians are wildly innumerate, but they aren't _that_ innumerate. My sister thought they cooked the data. They may have. But their article doesn't summarize their own data correctly -- and they structured the question to get a response they weren't impressed enough by to let stand. Hence 63% becomes 83%.

Here are my theories in order of how much I believe them:

(1) Monitored playgrounds with concessions a la Scandinavia would result in a lot of parents hanging out together drinking coffee and feeling relaxed and happy and chatting with each other. Fertile ground for "community organizers". Oh! The Horror! Must make sure that no one in the US would _ever_ support such a proposal. Poison the well or it will be just like gay marriage, abortion access, women in the workplace and freed slaves! (This is my preferred explanation, but I recognize it's pretty Out There.)

(2) 12 year olds who weren't in structured activities and were allowed to run around in public parks might generate public pressure to allow those kids to go find something useful to do. Get a job! Okay, let's get rid of child labor laws so they can do something worthwhile!

(3) Reason hopes to have a bunch of unsupervised kids in public places so they can make them all take a test that will show they aren't Democrats or Republicans like their Moms or Dads, but actually, They Are Libertarian! Thus refreshing the ranks of Reason.

(4) Reason is funded by secret pedophiles who are frustrated by the increasing difficulty of accessing prepubescent children.

(5) My personal favorite, altho I don't believe it at all: Reason interns are uniformly young people whose parents talk about how they ran around until Mom rang the cow bell/used the triangle/blew the conch shell. The interns were driven to one structured activity after another by those same parents (who vividly remembered all the kids who didn't survive), then attended the University of Chicago, got a degree in economics or poli sci and then went to work at Reason. They wish they had had some unsupervised time when they were kids because they sure don't have any free time now, since they are busy phonying up fake news like this for their internship.

Moral: If an annual survey is consistently released late in August by an ideologically motivated organization, don't bother with the summary. Go straight to the cross tabs, or, as my husband did, just let your eyes glaze over while you roll them.
Collapse