Second floor office is set up now, other than putting the crates away. 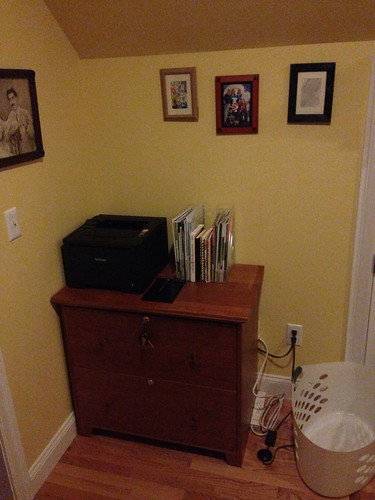 I still need to go up to the third and see how things are with the hutch.

Two half days, so I'm still mostly safe from taxes, but probably Friday I will be working on them.

That counts as working on taxes, right? Isn't there something on each of those forms saying how much time it is expected to take to fill out and there's a section about collecting documents?

I need to remember to bring up to the third floor the little brass bits that go into the bookshelf; R. has apparently dealt with the rest of it but cannot put the shelves in without the bits. Which I have. In a baggie. On the first floor.

Today was T.'s half day. When he got home, we immediately went to his swim lesson. It was earlier than usual because we did not have a sitter this afternoon and had to be back in time for A.'s arrival at the end of her full day. He did a great job during his lesson.

When R. got home, T. and R. went to Julie's Place for dinner (good thing it is close). He had the usual: chicken, fries and apple juice.

A. and T. played in the driveway on scooters for a while, then went out onto the covered porch to eat some doritos. They also played with Dora's Great Big World (an app) for a while. A. has gotten all of the stickers (altho she did bully us into helping, because the games are a little repetitive after a while); T. is still working on collecting them all because he only started playing it recently.

T. says he did Reading Mastery with E. He did speech with C. He had indoor recess. He had an apple for snack.

A. watched Frozen. Again. She has memorized it enough that she can tell you, in her own words, what is about to happen. Which is pretty cool.
Collapse