Someone did an analysis of DOR records by town, so you can observe Fun Facts like, wow, several percent of all households in Weston filed a tax return showing more than a million in income. I mean, we all knew about Weston, but it's still a bit startling.

Two days, two playdates, both successful! No swimming lessons this week; T. said he had an owie tummy and while I firmly believe that I know better than, well, anyone about, well, just about anything, even I am not arrogant enough to override a kid who is complaining about an owie tummy when a swimming pool is involved. Then today, the instructor canceled A.'s lesson because something came up on her end.

So, playdates! And while I was supposed to receive the two office chairs ordered for R. and T. (nominal Xmas presents, but we knew they would arrive much later) before the playdate today, in practice, they arrived after. T.'s was supposed to have arms; R.'s was not. In the event, neither had arms. I offered T. my old Aeron and he went for it, so I now have an arm-less Keilhauer Junior and I'll let you know in a couple days how I feel about that. It has the Weirdest Back Ever, and I'm not sure if it's a good thing. 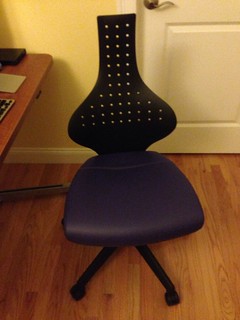