My desk has arrived. I can sit in my (aged, but just as functional as ever) Aeron. Or I can stand. Pneumatic! 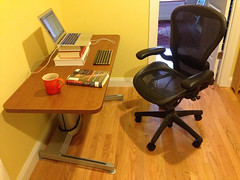 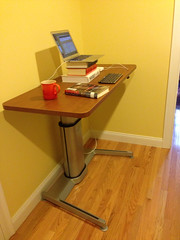 Next month's book group selection is _The Old Way_, by Elizabeth Marshall Thomas.

"Interestingly, the Ju/wasi took no position on homosexuality, which seemed unknown. Researchers of other hunter-gatherer societies have also found an absence of homosexuality. Perhaps the Old Way, with its arduous lifestyle does not transmit this quality."

Believe it or not, the rest of the paragraph gets even odder, but I'm going to let that part alone for now, because I've seen "Seven Brides for Seven Brothers" more than once.

Let's think about this for a bit. The !Kung or the San Bushmen or the Ju/wasi don't live in very large groups. And if there is one thing we know about homosexuality, it is that it tends to be very, very hidden in small groups, unless it somehow gets institutionalized. Given that the author's family wasn't able to find out much more about female sexuality beyond "the women know about and have orgasms", I don't think this family can claim to be any kind of expert on what might or might not be going on between the men of this group, the women of this group, or whatever.

Seriously. The only thing dippier than this author writing this (and her editor allowing it to be published) are the fools quoting this as if this is the Last Word not only on this society, but on "original" humans. I feel a great deal of confidence that you could have picked at random a large minority of an arbitrarily chosen town in 1950s America and asked them about homosexuality, and they would have either not known what it was, or believed it Never Happened Here.

But then let's stop and think about this for just a moment.

Back when I was responsible for catalog (and, nominally, search, but I discouraged efforts to actually make me do anything about search, because the search mechanism we had was nuts and I didn't have the capacity to deal with replacing it, which is what needed to happen. Ultimately, we got someone to oversee making that happen. Yay.), I remember having these great conversations with an extremely nice young man with the last name Beaver (the first name made this even funnier, but I am going to attempt to maintain some anonymity) (and his job before he came to us was at an online porn shop) and my boss (improbably, Mr. Beaver and my boss shared the same initials: D.B.). We'd be hashing out Issues with the catalog and/or search that had arisen and whether or not there was anything obvious that could be done to address them or at least mitigate them -- or just make us look like We Tried, It's Not Our Fault.

One of the issues we discussed was bestiality. The primary concern involved the spelling of the word. Many people searched on bestiality, but they spelled it beastiality, and some catalog information was also incorrectly spelled. We had an earlier issue with authors who had two word last names, non-hyphenated. They didn't like the way their names displayed and/or were sorted -- but lots of their fans complained if the last word wasn't treated as the last name. So we just listed those authors both ways and Suffered under everyone's complaints -- at least everyone could be _found_ and that's what we wanted: for customers to be able to buy what they wanted.

At least up to a point.

The bestiality/beastiality thing was a bit of a problem. Did we want to help people with their mis-spelled searches in this case? Should we be removing things with the keyword bestiality from the catalog? I was opposed to the idea of removing the keyword but leaving the item in the catalog. I think if the cataloger feels bestiality should be applied to the book as a subject keyword, the customer should know that, even if it is a spoiler (I believe in spoilers, so maybe not totally neutral here). I think we settled for correcting all spelling and not helping people find bestiality if they couldn't spell it. Our little moment of elitism. For the record, one of the D.B.s couldn't reliably spell it, either -- and my boss blushed really red throughout the whole conversation. (FWIW, one of my arguments in favor of leaving in things that had bestiality and/or incest involved the presence of both of these in the Bible. Not like we were going to remove _that_, amirite?)

So with this as my background, I have been reading about some Outrage among customers who discover incest and/or bestiality ebooks in the kindle store. This led to retail stores removing things from the catalog, thus leading to Outrage among people who kind of aren't happy with online booksellers in general (disproportionate success on the part of one company, its resistance to adopting ePub as a format, etc.). It may have been the case that some of these items attempted to get into the catalog by misrepresenting themselves. Possibly as Children's Books. You can see how that might really become a serious issue, given some of our laws.

I'm a big defender of the rights of sexual minorities, and I think a whole lot of people get worked up about kinks that just aren't a big deal. And reading books about something is really, really, really different than doing something. But you know, big online booksellers do not actually have to carry everything. And it might be better all around if they did not carry erotica with strong incest and/or bestiality themes. _Especially_ if the creators of these stories are gaming the keywords. I've been on the side of spelling things correctly, and identifying your item up front, for a long time now.

Want to read some Outrage? Enjoy!

After discussing this with my husband, I realized that we were speaking past each other. I am using a "discrimination" frame when thinking about retailers and things like bestiality and incest themes. The question I am asking is, is it illegal/immoral/unethical for a retailer to discriminate against an item based on this criteria.

Bestiality and/or incest are _not_ protected classes, and given that we're still writing laws against the activities, not likely to be any time soon. So while I would object to a retailer refusing to sell anything written by/about a woman, a person of color, a person with a disability, etc., I'm not prepared to deploy the same kind of outrage about this kind of erotica. Freedom of speech/freedom of the press does not actively require a retailer to carry all product and thus does not apply.

R. was framing it as an obscenity question. Once I realized that, I was like, no no no, that is not how I am thinking about it. I'm not saying a retailer should or should not carry this stuff; I'm addressing whether or not I think a retailer is being Teh Evil for having a rule along these lines.

In practice, there is no reason to believe that Amazon, for example, has anything against incest (hey, they'll list "Ball in the Family" from 3rd party sellers) or bestiality (they'll sell you "Sleeping Dogs Lie"), per se. I do think they want customers to be happy and keep coming back, which means sometimes the majority preference to not be shocked is going to make things trickier for people trying to find some material for their sexual minority fantasy. I don't think anyone is well served by papering over these differences and somehow suggesting that because some material was removed from some online bookstores, our literary culture/written environment has somehow been damaged.

I'm in the middle of reading _Perv_ by Jesse Bering, and while I applaud a gay man stepping up for better treatment of sexual minorities, I am not overjoyed by how he is going about it. For example, I see "well, animals do it" as a Great Argument to counter idiots who say things like, "well, animals _never_ do _that_", because, you know, counter example, ideally with video. Because _that_ is some funny shit. Just because animals do something doesn't mean _we_ should do that thing, any more than animals not doing something is a perfect argument against us doing that thing (really, gonna give up all your Apple devices that easily? I think not). But labeling the entire area the "Naturalistic Fallacy" without giving more consideration to _when_ it is appropriate and _when_ it is _not_ is crude and unhelpful.

Also, Bering's treatment of our understanding of how we think about the world and make decisions lacks a lot of nuance in important ways.