T.'s school had a professional day, so he's still home.

I made an apple pie, because there are a ridiculous number of apples in the house, mostly as a result of A. going apple picking with school and then yesterday with B. You put bags of apples in front of me and it will occur to me that it is time for Pie. 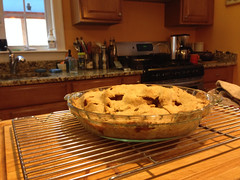 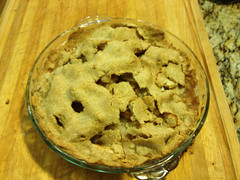 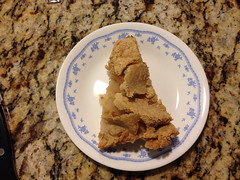 There were problems. First, I cut up too many apples. I always do this. So enough for a second pie went into a gallon freezer bag. We'll see what happens with that; I've never tried to bake anything from frozen apple slices. Could be totally disgusting. Second, I completely forgot sugar and cinnamon. So the ingredients list was: spectrum shortening, whole wheat flour, water and apples. I did not forget the salt, so much as intentionally left it out. But the cinnamon and sugar was an error. Confronted with a pie that was a little on the bland side, I thought about making up some sauce, decided it was too much effort, got out the cinnamon sugar and sprinkled it over the crust. Perfectly acceptable -- fake ice cream would have been good, too, but I only had chocolate.

I should make pie more often. Altho that wouldn't be good for my arteries, presumably.

I was telling my sister about two separate series of interactions I've had recently with people I have known for a number of years. I had a lot of trouble with both of these interactions, because what these people wrote to me was really offensive, and I just wasn't sure what I should write in response. On the one hand, I like these people and respect them (they are older than me). On the other hand, I don't want to be around the kind of stuff they were saying, and I really don't want to inflict anyone who holds those sorts of attitudes on anyone else I know. I'd be embarrassed, and I'd feel responsible.

Because of the age issue, and because they are my friends and therefore on the spectrum (one of them recognizes this; the other denies it, ans is a big chunk of why I've been increasing the separation between us over time), I have been uncertain how much I can reasonably expect them to be aware that what they are saying is Really, Really Bad and They Should Know Better. Sure, they grew up around this sort of thing, but it's not okay anymore.

My sister wisely pointed out to me that, in general, people don't _know_ they are racists. I hate to be the one to break it to people that that's what they are doing -- it rarely goes well -- but I thought I'd google the question "do racists know they are racist" and see what turned up. Maybe someone else had a really good breakdown and I could have that in my repertoire should this situation arise again in the future.

And while I'm at it, I'll include the particular trigger issues that came up in the two recent interactions.

(1) Don't blame Muslisms or Islamic culture for displaying very, very typical human behaviors. It's not a them thing. It's an everyone thing. Ditto for immigrants or any other group. And _really_ don't go around arguing that Islam is an unusually violent religion/culture/wtf. Seriously, that just makes you look awful.

(2) Seeing labels in other languages than the one you expect _is_ confusing. Don't say that you perceive it as an assault. Especially if the labels are in the hardware store, where they are there to make it so people can do their job. We don't have an official language in this country, and being a Citizen of the United States is not about what language we speak. It's about shared cultural values like freedom of _speech_.

(3) Taking a small sample of experience and generalizing it to cover a large group of possibilities is something we all do. Doesn't make it right, especially if the effect contributes to the oppression of people for something they had nothing to do with, whether that's mockery, added expense, difficulty accessing resources, or whatever. Just because that generalization makes our lives easier _does not justify it_. The opposite of true. People's feelings about our lazy over-generalizations (such as the one I recently made about a couple of medium sized towns in the Northeast) _are important_, far more important than any technical, numerical validity of the generalization. This is not the same as saying We Should Never Generalize. I'm saying that we need to be sensitive to how we do it and respond to feedback about when we got it wrong.

But it doesn't have to. I can recognize that I have a position of privilege, and still work towards a world in which I do not have that position of relative privilege. I can recognize that I benefit from that privilege and embrace the value that privilege is Wrong. It may be a little sticky getting from OMG, I'm about to lose something to, well, it's kind of wrong that other people don't have this thing that I have. But it's a really good place to get to.

And while I'm at it:

ETA: After discussion with my sister, I'm going to add a couple more things.

If you defend George Zimmerman, I'm going to decide you're racist.

_The Bell Curve_ is racist. It's great and very dangerous propaganda, in that it's hard even for intelligent people to perceive its racism, if you don't have enough life experience or maturity. But it's still racist.

It's funny. Consistently, hilariously funny, but this one about made me pee.

I have _no idea_ why I think it's so funny, other than that the customer service rep was so on their game.
Collapse