Around the time that I retired, movies began the long, slow transition from physical media (film) to digital (whether on disc or a hard drive or wtf).

I thought that was mildly interesting, but I can't say that I gave it a lot of thought. I had worked in concessions and later box at the Aurora Village multi-plex (back before the whole mall was torn down and replaced with a Costco -- I also worked cashier at the Woolworth's. Sometimes I feel like I live in a time warp), so I had absolutely Zero Affection for film per se: I thought of the physical media as shitty, fragile stuff that the general manager delivered in a car that was extremely tiny (a Corvette, maybe -- and he was a large man). The cans themselves were incredibly beat up, which probably didn't help me love the format, and then there was all the cursing constantly coming out of projection over splicing and blah blah bleeping blah.

Now it is 2013 and I have been taking my two kids to the movies. I worry about this, because (a) they are kids and (b) they have diagnoses. I was overjoyed to find a theater nearby playing relatively current movies including kids' animated stuff, that was ancient and sticky, cash only and (as these things go) inexpensive. I wouldn't have to drive a half hour each way to get to a mall multiplex. If something spilled, no one would ever notice or care. And the light attendance and general low expectations meant my kids' somewhat random behavior and noises would not generate an embarrassing incident. Also, super close! Only a few minutes in the car and conceivably bike-able when the kids are older. Yay!

When I went to go look at whether they were going to get Cloudy With a Chance of Meatballs 2, however, instead of showtimes, I got The Fine Arts Theater is closed. A little investigation revealed an August campaign to do the digital transition (uh oh -- everyone else started their capital campaigns to transition to digital like, at least a year ago) that did not appear to be going really well.

So what happened? The obvious conclusion -- and the one I held up until this morning -- was that the people who bought the theater in the spring and were dumping a bunch of money into renovating the building -- did not know What They Were Doing. And it's possible that is still the case. However, they've updated their FB page to explain that they inherited a tenant-operator who sort of shut down in a Big Ole Hurry without notifying Them. The new owners had assumed the tenant-operator would be upgrading equipment, but alas, not so. Now the owners are working on operations while trying to figure out if they want a new tenant-operator, or if they're going to have someone else do it. In the meantime, the fundraising for the equipment, and they're working on doing the interior renovations (which are truly needed and were going to disrupt operations at some point anyway, so no time like the present, amirite?).

I'm trying to figure out what I think of a capital campaign being run for this purpose, at this time, in this way. I'm sort of not impressed. However, if you thought your tenant-operator had this under control and then they walk, well, that's a solid explanation.

I will await developments -- and try to decide whether Cloudy 2 is worth a longer drive. Probably not, unless the kids _really_ want to go see a movie, which does happen once in a while.

Last night, I got out a bottle of Pellegrino. T. had asked to have some with lime. This has been my evening beverage lately and he's decided he likes it, too. As I set it down on the counter, T. says, "Facebook!" and points at the bottle. 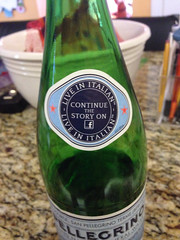 It's really tiny, and T., as near as we can tell, doesn't read in any general sense. But he's sure amazing with the branding.

I haven't gotten around to setting it up yet -- this rolled out in April and I'd been meaning to go looking for it since I found the UPS version a month or so ago quite by accident. Maybe this afternoon.

If you use USPS vacation hold, and have ever wished you could do the same thing with commercial package delivery, check these out.

ETA: I set up an account with FedEx, and then noticed that both FedEx and UPS have mobile apps. Connecting FedEx was straightforward, but apparently I used FB to login over on UPS, so that took a minute to figure out because it didn't Just Work at first -- but the second time it did. *shrug* Given the trouble I had earlier today with iMessage, I'm just going to blame Change.

On the whole, I'm impressed and pleased with the granularity of control each service is giving on notification of packages and then managing where/how they get delivered. Online commerce can only benefit from this, as people who don't want stuff just left at the door now have some say about where it goes and when.

I was reading about the shutdown over at the Chicago Tribune; it had a quote from history of politics named Julian Zelizer. Now, Zelizer is _not_ a common last name, and he's a Professor at Princeton, causing me to go, hey, isn't Viviana Zelizer a Professor of Sociology at Princeton?

Anyone else got examples of mother and son (or daughter) working at the same institution as full professors? Because this is the first one I've noticed, but they would not ordinarily be so obvious.

(I'm still resisting the temptation to buy V. Zelizer's _Purchase of Intimacy_, until I've read _Pricing the Priceless Child_. Maybe I'll pick that for Read or Release after I finish the Fred Harvey book.)

I have blogged that I wanted a particular kind of cabinet for storing and displaying small items. It was a completely familiar cabinet from my childhood, because lots of people stored their Red Rose tea figurines in them. As in, like, every JW woman whose home I was ever in.

But no one else seems to remember them! Which means this may have been a very working class thing to do?

Google images to the rescue.

An antiques store has no animals in stock, but is _selling the paper tea boxes_ for $7.50 each, for ID purposes. The UPC code has been cut off, which means it was sent in as proof of purchase to get a premium item -- such as the cabinets I recall.

This is a current auction on ebay, of a cabinet (like I remember! Complete with the type-box-style dividers that I didn't necessarily want myself) with a collection of the figures. $125 Buy It Now.

Cases like these are also used for thimble collections, and with different internals for souvenir spoon collections.

Red Rose's website (they still exist, and still do the figurines) describes the history:

And you can read more on the wikipedia page:

"During the 1970s, United States test markets for the figurines were opened in Pittsburgh, Pennsylvania and the Pacific Northwest states."

I suspect that my mother and all her JW friends were collecting during the test market phase, because this isn't something I remember her getting into when I was a teenager in the '80s.

In the back of my head, I've always felt like there was a strong familial connection between the desire to collection action figures and the affection that some people feel small ceramic figurines -- and it's just the same as dollhouse collectors and anyone else fascinated by miniature worlds, which is ultimately almost everyone, if the correct form is found.

I hadn't realized Red Rose was a Canadian brand. Perhaps that was another reason for my mother to drink it.
Collapse