I hitched up my jeans a little to better display them. I'm not _actually_ that dorky when it comes to pant leg length. 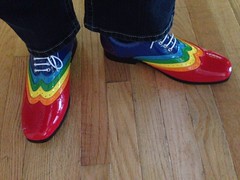 I believe my husband has already FB'd the shoes with a picture of them not on someone's feet.

Many thanks to my High Priestess to pointing me at these truly glorious products.

I bought them here:

Both kids were at school for full days today. The last time that happened was Tuesday. T. was home Monday and Wednesday. A. had afternoon half day on Thursday and T. came home early. But both of them were in school for full days today, so I got a walk with M., lunch with R. at Karma (excellent! Nice place, great lunch specials, decent cold sake), followed by coffee at Starbucks. At Starbucks I was the Jack Johnson CD that I had already downloaded -- and the Janelle Monae CD that I only had one track from and didn't know was out yet! Obvs only got the coffee, but downloaded Electric Lady when I got home and asked R. if he had an opinion of the new album from Kings of Leon (hey, I'm old. I don't have to have good OR consistent taste).

Then we went to Circle Furniture, where we ordered the left arm version of the Astoria chaise from American Leather: http://www.americanleather.com/Sectionals/All/Astoria.aspx

This is complex, because it is replacing a somewhat smaller loveseat, so it isn't a drop-in replacement. We will be Rearranging Furniture. The current plan is to move the loveseat along to HGRM along with a bookcase (I know, shocking: not just emptying a book case and moving it elsewhere in the house and putting toys on it, but actually retiring it from our household). It's not like I've never done this, because as I've moved, I've adjusted height/width of book cases by replacing them. But this would be a net decrease, which is sort of amazing (not to you -- if you don't have a book addiction problem). The couch should then fit along the wall next to the piano, but it'll be kind of tight, so we'll probably start actively working on the piano upgrade project. We have a used upright, and we want a used spinet; the current piano is End of Life for reasons having to do with non-repairability of this particular technology (R. can explain it; I can half visualize it, which isn't enough to generate an explanation).

It's a thin book, and I have some issues with the authorial tone. Some of the stories are amazing.

But here, on p 29, Jordan Fisher Smith is explaining about storm waters over Christmas 1955:

"But before it was even finished, a huge storm over Christmas 1955 filled Folsom's million-acre-foot reservoir in a single week. (An acre-foot is just what it sounds like, the amount of water it would take to cover an acre of land with a foot of water if nothing soaked in, or just over 326,000 gallons of water. This is roughly the amount an American family uses in a year.)"

First, a little background. I live on a sewer, but the intersecting streets to either side of me are not on the sewer (nor is the long block that connects them). The people who live in that area asked a lot about extensions to the town sewer when it was first created, so an early extension of service was planned to go in. However, others who lived in that area were extremely opposed and, er, dissent ensued. When the Sewer Department put together three meetings to provide historical background on the sewer, as part of information for the current board of selectmen to write a bylaw, these meetings were recorded, and a friend of mine (on the anti-sewer team) sent around the links. I actually had the time and used it to watch the meetings, which a lot more fun than it probably sounds (hey, my neighborhood got compared to the Hatfields and McCoys. I love local politics. Sometimes).

You'll notice that even the outrageously 2.5x number is producing an annual water use less than _half_ what Jordan Fisher Smith casually mentioned. An American family would have to be going through twice again, to be what this author mentions.

Perhaps the "average american family" in Jordan Fisher Smith's numbers waters the lawn. A lot. My figures may be indoor only. If you watered the lawn at the rate of 10 gallons a minutes for an hour and fifteen minutes every single day of the entire year, well, you'd flood your basement and your lawn would die, but you might come up with the annual water usage he refers to.
Collapse