Here are the Purple Bags: 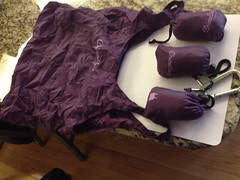 After getting annoyed -- again -- at the paper towel re-users, I stopped and thought for a few minutes. I try to avoid doing this, because it really brings out the worst in me. But sometimes, I just have to.

We do sometimes come home with plastic bags. It is Unfortunate. Sometimes we didn't realize we would be going shopping. Sometimes, takeout was involved. Obviously, we do what everyone else does and use them to line small waste-baskets, mostly in bathrooms.

We store them in these: 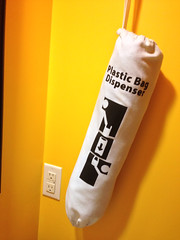 One upstairs, one down. 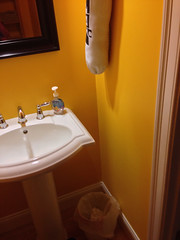 It's a short trip from the dispenser to the bin.

But if you are anything like us, then plastic bags come in far faster than the trash goes out. So we had to reduce the incoming flow of plastic bags by bringing our own bags to the market. I tried a lot of different strategies. Mostly, the bags stayed at home, or in the trunk of my car.

Then I got these (first an earlier round of two pink bags; this is my second set, of four because that's about what I'll usually wind up needing). They self-stuff (I showed one open, three closed, two attached to a regular biner, one closed and loose). They have mini biners that are too small to attach to anything useful and too fiddly to loop together. So they all live on a regular biner.

The regular biner lives by the door to the garage, with the keys (this is an older photo, from July when I was walking around the house taking pictures of organizational Things): 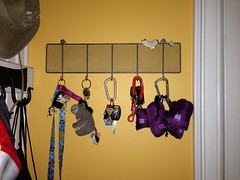 From there, it can be hooked to a handbag handle, dumped into a tote, looped onto a belt or belt loop, whatever. It usually makes it to the store with me.

You have to wash reusable bags or they get stinky. Sometimes I leave the biners on, but usually I take them off when I put them in the wash, because that's how the pink bags lost their biners (I think). I let them air dry, rather than put them in the dryer. They are nylon, or something similar.

They are purple, because Purple is My Favorite Color, and has become a theme. If it's purple, it must belong to me -- no confusion, minimal risk of "theft" by others in the household (the kids borrow them to play store sometimes, but I generally corral them by the end of the day).

This strategy evolved over time. It's extremely difficult to get rid of plastic bags, so if you are trying to do so, don't be hard on yourself. Those suckers are sneaky. But this is part of my Religion of Stuff that I retain a lot of faith in.

My last CRT never made it out of Seattle (at least not with me). The Trinitron suffered from some color problems and I replaced it was an early non-plasma flatscreen (at the moment, I could not tell you if it was LED or LCD). That one suffered from black smoke while in New Hampshire; upon our return to Seattle, we had it repaired, but it, too, eventually died and was replaced with our current hardware.

This CRT was R.'s. When I arrived with my flatscreen, it moved up to the master bedroom. When we got a small flatscreen, it wound up in the basement viewable from the treadmill. When we moved here, it wound up in the basement but was never actually hooked up. And there it has sat for 4.5 years, until I located a cart, got it out of the basement and into the trunk of my car, and then brought it (along with the substantially lighter moving box containing a playstation 2 and accessories -- unused since some time in 2008, IIRC and interpreted the writing on the box right) to Best Buy in Burlington, where they kindly relieved us of these excess and obsolete electronics without asking us to pay for the privilege.

This is a big improvement over the alternatives. The town transfer station wants $30 for me to visit (they'll sell me an annual sticker for even more, but I don't ever go), and $25 for the TV. Apparently, I will drive to Best Buy in Burlington to avoid paying $55 to the town transfer station. I find these little Real Life Economic Data Points fascinating. It's probably a character flaw.

It might have been possible to recycle a CRT through Waste Management, but I couldn't find any evidence of it and didn't feel like making a phone call.

I think I'm currently paying the sitter .50/mile, and the IRS reimbursement rate for charitable activities is .14 -- for business it is .56. The round trip distance from here to Best Buy is about 35 miles, so I probably did not expend more money by driving than I avoided having to pay by going the larger distance. Round trip to the transfer station is around 4 miles.
Collapse