The first complaint was sufficiently lame that I could not bring myself to actually blog it: the first 6% of the books is made up of repetitive introductions to various editions. So there's that. I know, it's a common issue with popular text-book-y things, and it helps to contextualize what changed and why.

The book takes some ideas from math and science. Without actually mentioning linearity, they sort of skip right to non-linearity and then whether or not politics exhibits behavior characteristic of equilibria or not. They do all of this completely qualitatively, so I was prepared to treat it as a metaphor, rather than actual math. Their other metaphor is "punctuated equilibrium" associated commonly with Stephen Jay Gould, but with a longer and more interesting history: http://en.wikipedia.org/wiki/Punctuated_equilibrium.

It is _okay_ to use metaphors from science to think about other things. I don't have a problem with that. It is _not okay_ to think that you actually get the kinds of things that go with actually doing the math to come along with that metaphorical use, and I don't know yet whether these authors will attempt that.

In the meantime, I'm complaining about an incorrect name.

"This is the well-known paradox of voting, first analyzed by the French mathematician Concordet [sic] in the late eighteenth century and rediscovered by Duncan Black in the 1950s."

This is the second edition. 6% of the book is introductions, plural. And we can't get the proper nouns right? I actually _have a rule_ about not buying poli or econ stuff from University of Chicago. And here's another reason why.

T. developed laryngitis last night. He's home sick, which means we are riding around the block a lot. He's on the Taga trike, minus the kid attachments. Looks like we'll be keeping this; perhaps I'll go look at the shopping bag accessory again.

I am still looking for the jump ropes, altho with less and less hope of ever actually finding them. I've resorted to actually going through _and labeling_ every single bin in the basement. Fortunately, there was a big trash bag down there to reduce the volume of what I had to come up with descriptions for. The textured bins do not hang onto labels very well; not sure what to do about that.

Along the way, I found, photographed, and disposed of these, from our wedding in August 2004. It is a tribute to R.'s ability to keep basements dry (and to deploy those little dessicant packets appropriately) that they look this good so many years later. 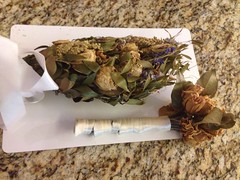 In between bouts of inventorying the basement and hauling out Crap to get rid of, I was googling to see what other people wrote about their basement efforts.

After an initial consensus round on large items:

"We also made an agreement right up front, that if I decided the item should go- either through donation or trash- that Steve wouldn’t question the decision. He gave me “carte blanche” to conquer the clutter!"

"I thought back to a phrase that I learned during my business-woman-career days called “keeping a project in scope“. Define the scope of what you are trying to achieve (in this case, a decluttered and organized basement)… and then try to limit your work to only what pertains to the original project. So while there were a few times that I did go into other rooms to gather items of the same category (such as the other two places in our house where I had been storing craft supplies), I limited my work in those rooms to only gathering the items!"

Sounds like the city is thinking about doing some code revision to regulate kitchen size and mandate bike parking, rather than impose a moratorium. This sounds reasonable to me. _Especially_ the bike parking. People always act like bikes should somehow just fit into living space and it winds up blocking stairways and hallways either in or out of units and constitutes a significant problem for emergency exit/access. Planning for it means that you can have your bike parking and get out quickly (or in quickly) in the event of earthquake, fire, medical emergency, etc.

ETA: If kitchen regulation just winds up adding sinks, that doesn't make a ton of sense to me.