These didn't get adjusted -- their contents have been, slightly. Also, a way better angle so it only takes one photo, instead of three. 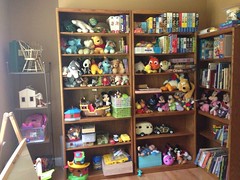 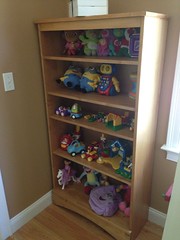 Here's where the metal and wood shelving went to when it left the upstairs hall. I'm not enthusiastic about this placement. It sticks out from the wall too much and you have to reach past it to get to one of the switches. 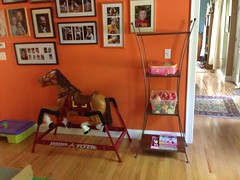 And the other shelving in the room with it, that replaced a sideboard that went away a few months ago, along with a dining table, chairs, leaves, cover. These fold up, which is cool, but are a little rickety. Only the narrow one had been in use; the wider one was stored. The narrow one was freed up as part of the current library purge. We cannot put some of the other cases here because there's an air return that we cannot cover up on the floor. 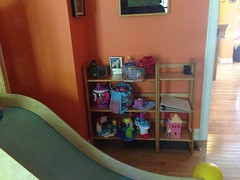 The white binder is this year's kid-art album. It's filling up too fast, so I'm going to have to edit it at some point.

Here's a blurrier picture of the same shelving (minus the narrow unit), from when I blogged about the rice mosaic hanging above it.

I ordered the desk today, but don't expect to receive it for a month or more. As I'm looking at these pictures, I am thinking, hmmm. Maybe we should have this room painted.

Looking from closet through space into master then the upstairs hall then A.'s room: 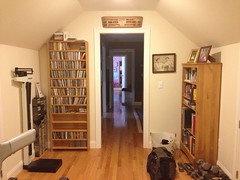 Looking from the master through the space into the closet: 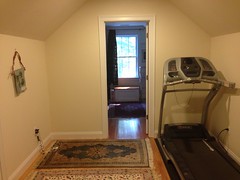 We don't use the treadmill for about half the year, but then the other half of the year we are Really Happy It Is There. Since R. runs on it, replacing it with a low-profile walking treadmill to go with my new desk is, at least for now, not a possibility (we'd have to figure out a space for the treadmill that you can run on).

Having just read _The End of Suburbia_ and then talked to my sister a bunch about how the amount of space we live in is likely to undergo some downsizing over the next few years/decades, and being in the process of extensive purging of the library (and before that my entire CD collection, modulo the opera and the kids' stuff), you would think I'd be itching to move to smaller digs.

Ha! Turns out the more I get rid of, the more I like having all this space.

I'm currently trying to convince R. that we should take up the area rug on the other half of the living room, set up one or more speakers downstairs, and use that part of the room as a dance floor. The drinks cabinet is already over there.

We _did_ have a small Beanie Ballz unicorn! And, in the middle of looking for the jump ropes (which I still have not found), I found it!

Here are all four Fluffy Unicorns: 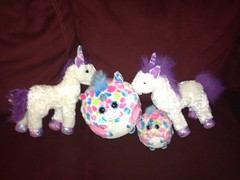 I feel like there should be some Minions in that picture.

I found a whole other bin of toys I had completely forgotten about in the course of looking for the jump ropes. I also found some framed pictures we took down for painting that never made it back up. So I took a couple frames down and put their contents in albums, and put up a couple of things. Three more to go. I'm trying not to net increase the number of framed things on the wall, since there are over a hundred things up already, which makes me ... uneasy, now that I realize what I've done.
Collapse