Yesterday, I took a picture of myself with Freshly Done Hair (purple!) in front of an empty bookshelf. Suggestions were made, like, hey, there should be a kindle on that shelf, just to sprinkle a little salt in it, amirite?

Today, I moved the books from a case in the interstitial space upstairs to the empty bookcase (I knew that wouldn't last long), creating a different empty bookcase, which I then moved into the upstairs hall, replacing one of the metal and wood decorative shelving units (it has since moved to the playroom downstairs, which I am not overjoyed about. Further rearranging will occur).

For that brief moment in time while it was empty, I put my current, soon to be obsolete paperwhite in its pink case, the original kindle, and the original kindles packaging all on a shelf and took pictures. I'm not overjoyed about the way they turned out, so I'll include two here: one that I like me in, and one where the kindles displayed well but I look like a dork. 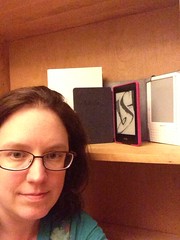 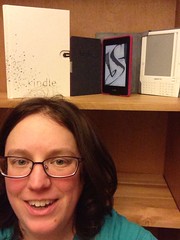 Tomorrow, I'm going to get pictures of the upstairs hall; the new case is already loaded up with toys. Yikes. Also on the schedule for tomorrow: return the cable box (which we haven't used in, oh, a year or more) to the Verizon store so we quit being charged for it, and bring a couple old DVD players and an 8 year old TV (small flat screen) to HGRM. The TV is leaving because it doesn't have an HDMI in and we didn't have a clear need for it anywhere. The lack of HDMI in meant we'd have to keep around an old DVD player, or the cable box or something similar in order to play anything on it -- I couldn't just get an Apple TV and hook that up, which would be ideal if it was going to be a kid-tv in the upstairs hall. We had been planning on putting it on the deck (R. even got a bracket for it), but that was supposed to happen last spring and now it is fall and I don't feel like putting any more effort into it. Better to pass it along to some family that could make good use of it.

It does forcibly remind me, however, that the real problem with aging technology lies in the connectivity, more than anything else. Those pesky connectors, we love it when they improve them, but that's definitely where backwards compatibility gets tricky.

ETA: Looks like we're going to try a cheap Roku for a bit before moving the TV along, see how it works.
Collapse