There's a genre of "selfie" photo that involves being in front of books. However, I've been all about shifting from p-form to d-form for everything, so the books have been going away. I thought it would be more appropriate to take my picture in front of an empty book shelf. Realistically, it won't stay empty, but for one brief shining moment, I have brown hair with purple streaks, in front of an empty bookshelf. 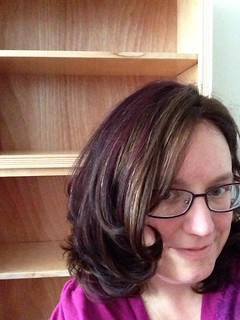 I got my hair done today -- it never looks as styled as it does right now. But that's okay. This time, it has purple in it, which helps me with my unfulfilled, long-standing ambition to be Shampoo from Ranma 1/2 (never gonna happen, just like I never get to be a dolphin, either. *sigh*).

Which reminds me, now that we have a DVD player that will play them, I should get the Ranma discs out of the basement and start indoctrinating the children. Nothing like gender/species changing martial artists.

When I finished clearing off the bookshelf yesterday (the one in the picture), I was really excited, because it meant I had four open shelves, enough to transfer the contents of the bookshelf in the interstitial space in the master suite to the 3rd floor, thus leaving me with the tricky problem of what to do with that book case. It's a nice book case, but I want the floor where it and the (also nice) cedar trunk next to it currently live for my hypothetical future desk. Which I would like not to be hypothetical anymore.

For some reason, shuffling books around (and out the door, for at least some of them) got me thinking about Carlin's routine about stuff again, a reminder that was reinforced by reading Leigh Gallagher's _The End of the Suburbs_ (which is excellent, review to follow shortly), and checking out LifeEdited (which is considerably less excellent, altho I'm happy to note that Murphy beds are enjoying a renaissance, and those coffee tables that turn into dining tables are pretty cool, too).

Carlin's routine, Gallagher and LifeEdited all have a tendency to make me think about the foolishness of having so much space to house so much stuff, especially when I'm busy shuffling some of the stuff around to make space for still more stuff, or, at any rate, different stuff.

Fortunately, Gallagher has a great quote from Duany that reminded me why I'm doing this (I know, you wouldn't really expect it from him, right?): "The private realm is objectively fantastic." And, much like having purple in my hair, it really is. It's kind of a pain having to constantly be moving stuff along and getting more and taking care of it and rearranging it and blah, blah, bleeping blah, but that's just doing all the stuff that we enjoy the results of when we go to a really nice hotel.

As for the hair, T. wants the "light brown" back. The van driver was operating under the assumption that my previous appearance was "natural" -- this is funny, because it was quite red underneath, with brown, red and blond on top. Despite the assumption that the previous choices were "natural", she complimented me on the purple, and said, "Who says that's just for teenagers?" B. liked the color when she saw it, but mostly saw it was a darker brown -- the purple doesn't show up in low, internal light. She suggested that tomorrow morning I get a picture of the purple hair in front of the front door (which is now purple as well) -- which is a great idea, since that's an eastern exposure.

Subtitled: Where the American Dream is Moving

Short form: Get it. Read it.

In this extremely recent book, Gallagher, a writer and editor at Fortune magazine, surveys trends in real estate that began before the bust and are becoming impossible to ignore. Gas is more expensive, thus "drive till you qualify", which made minimal sense before, doesn't make _any_ sense any more. Millenials want a different mix in their built environment, and they're starting to hit the kid-age and having those kids in built environments that are a better match for what they want and need. Aging boomers are retiring in place, changing the demographics -- just by being older -- of the suburbs they continue to dominate.

It would have been All Too Predictable if Gallagher had just gone and interviewed the usual New Urbanist suspects. But she didn't stop at Duany, Plater-Zyrbek, the Congress for the New Urbanism, Seaside and mixed-use-is-everywhere. She went and talked to people at Pulte and Toll who are building residential in cities. She went to a home builders conference (twice!). She talked to people who used to work for DPZ and Don't Any More. And she spent a bunch of time looking at census numbers.

While her take on the Baby Bust isn't the best, I am not prepared to complain about it, because it's hard to present those numbers in a way that neutrally represents reality. What Gallagher does best is depict the history of suburbia, its current state, and a trend which is still in its first decade-ish but getting market traction -- not just the cult of New Urbanism, but market driven mixed-use, walkability, smaller scale, less private realm/more public space orientation, blah, blah, bleeping blah. She recognizes the role played by changes in what government at various levels has funded in the past versus what it can fund going forward versus what it is funding right at the moment. She acknowledges the role played by changes in the cost of energy, notably vehicle fuel. And while she quotes Kunstler (you cannot really avoid him on this topic), she doesn't really get into it, which is just as well.

Gallagher is not heavily committed to a particular vision of The American Dream or Where People Will Live. She sticks to what the data indicates, which is closer-to-services-and-amenities, smaller, and with shorter commutes. Beyond that, there are a variety of different options that are currently available, and she speculates a little about some alternatives as well. Perhaps because of the time frame in which this book was researched, I think she wound up overly pessimistic about when/whether some subdivisions at the fringes would ever be finished/populated, especially in the Riverside-San Bernadino MSA.

It's a remarkable book. I rarely read books where I am so familiar with the material, and learn so much from the way it is assembled and analyzed. I hope to read more by her in the future.

I'm about to move the contents of one bookcase to the currently empty case, and then move the former to join a bunch of other ex-"book"cases. I thought I'd put together a "before" (back in July) photo, and then follow it up with some "after" photos (September). In the interim, some toys have moved along to other homes and some new toys have arrived. Because I know I'll be taking another set of pictures, I'll probably do some additional editing. But here they are in July.

One of the shelving units, not strictly speaking a "case": 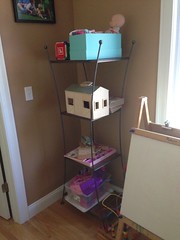 The other one, which almost but does not quite match: 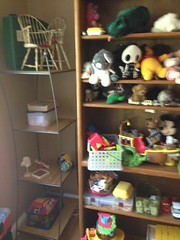 You can see some of the cases next to it.

The top of those cases: 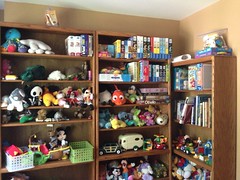 The bottom of those cases: 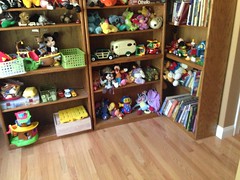 If you explore things in my Flickr account with that title, you'll find more repurposed cases in other parts of the house. I'm not including those in this post, since I'm focusing on the upstairs hall, where another case will shortly (hopefully!) be moved.
Collapse