I had Acton Framers use a blue frame and a yellow matte; the string art itself is blue and green. Once again, I was trying for a contrasting blue and wound up with something that looks like it matches in most light. We could have put it almost anywhere (the blue and yellow I picked out work well with the colors in a lot of the rooms) and I was originally going to put it in the playroom. But then I thought, we have this Bright Green bathroom. How would that look?

Strictly speaking, the piece is Much Too Small for the space. But I can live with that. Also, R. is going to have to fix the way I put it up, because I didn't get the two hooks quite level.

Note the unbelievably perfect match between the bath towels (really, they are so huge they are more like blankets) hanging on the rack and the paint. R. spotted those towels at Costco after the room was painted _without having a swatch on him_. Kind of amazing, really. 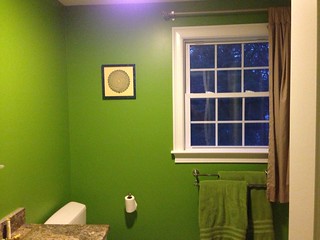 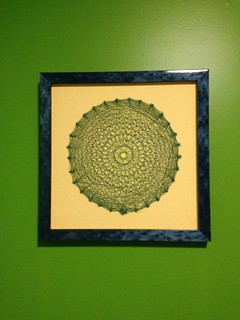 Every time I look at this thing, I think, "Why can't I remember actually doing this thing? I remember having it. I remember it being mine. I remember dismantling it from the sheet of construction paper they mounted it on."

And then I think, well, the only memory I have of learning how to scale a fish is tactile. And I have a tactile memory of doing this thing. Sometime in my early 30s, I was watching my then boyfriend pick out the wrong knife to remove scales from a fish, and then pick the wrong direction AND the wrong angle. I decided I did not care about his Sensitive Male Ego, yelled at him to stop, picked a nice dull knife, and got those scales off right Quick with minimal damage to the flesh of the fish. He looked a little stunned, and then wanted to know where I'd learned to do that.

I must have had a very odd childhood.

I've blogged about this before, but I don't think I've ever posted pictures, because posting pictures was really unusual for me until quite recently.

Here's the Raggedy Ann and Andy rice mosaic. It's approximately 1 square foot and dates from sometime in the late 1970s. I had Acton Framers shadow box it; they did a really nice job with cutouts of hearts in the double matte. 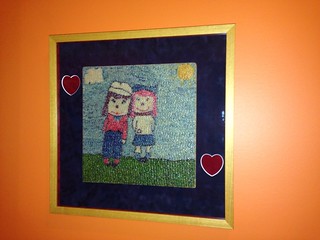 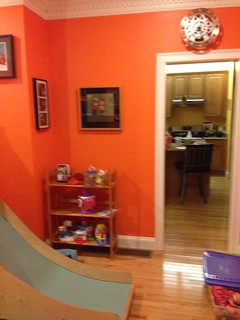 You can see the bottom of the CedarWorks slide in front of it, and the doorway to the kitchen with the Kikkerland clock above it.

Back in November, I posted a couple of times about sifting through curios, deciding I wanted a very minimalist curio cabinet to display them in, having trouble finding such a thing and resorting -- successfully -- to Etsy.

Last July, I wandered around the house taking pictures of various home organization strategies for a possible blogging project that I haven't followed through on (and probably won't ever follow through on, altho you never know). Here's the curio cabinet: 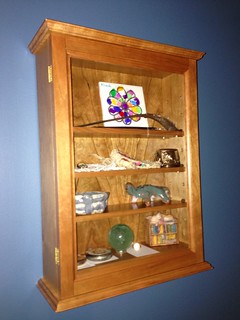 A previous entry on the topic: http://walkitout.livejournal.com/929138.html
Collapse