As I've been trying to figure out what's going to happen with cash, just as I did when I was trying to figure out what was going on with discs (CD, DVD, Blu-Ray, etc.) vs. downloadable media, I'm going to be experimenting with doing what apparently everyone else is doing already, which is walking around largely without folding paper and metal plugs. I ordered one of the Speck phone card cases, in the service of this exercise, and while I was at it, I downsized my wallet, since my current phone no longer fits into the pocket (well, not functionally for using the wallet, anyway) of the wallet.

Speck hasn't arrived yet, but the Big Skinny Taxicab wallet has. (Why are they called that? Anyone know?)

Before and after photos. I removed two receipts from today (dentist credit card slip and the cash receipt from the liquor store where I bought two very nice bottles after dropping off about 50 empty bottles -- none of them liquor -- in the redemption center. The redemption money didn't even cover 1% [eta: I can't do math when I'm sober. Bad sign! Did cover more than 1%. More than 2%, actually.] of the cost of what I bought and I am Very Okay with that. I haven't had Basil Hayden in a while, and the Anejo looks yummy. I also removed the stamps, and one souvenir smashed penny. 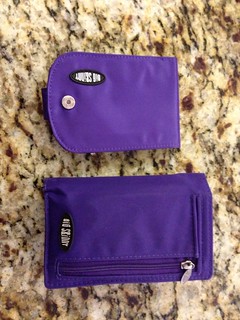 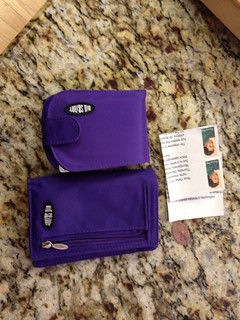 There's a micro-donation system called Flattr: http://en.wikipedia.org/wiki/Flattr. They are already trying to sign up buskers. They have QR codes, if I understand their blog correctly. So instead of throwing change into an instrument case, perhaps you could pull out your phone, use it on the QR code and that might let you donate money through Flattr. This does not seem like a great solution, in that I think you might need to have an account set up on Flattr before you can donate, and that is a barrier, unless, I suppose, you are the kind of person who often gives to buskers, in which case perhaps you'd just do it and then it would be easy.

I, myself, do not generally give money to people who ask for it on the street (I'm not saying I never have, just that I almost never do), but it seems to me that if/when cash goes away, that could be a bit of an issue. Don't search on panhandling and flattr; it goes to a Bad Place. There are memes out there about making a homeless person smile by giving them shoes, or a t-shirt, a sandwich, a bottle of water, etc., and judging (har de har har) by some of the reporting on How Do People Who Ask for Money on the Street Then Spend the Money, I suppose some of the problem could be addressed by just offering people beer and/or cigarettes and cutting out the cash-in-the-middle (<-- I am not advocating this!)

Taking this a bit more seriously, busking and other requests for money on the street are essentially informal person-to-person transfers, which can be handled in a lot of ways: a busker probably doesn't want to stop to use a Square Reader, but you could _almost_ imagine some sort of scan-a-code system that could be implemented by Real Change (maybe a pin with a QR code on it: you scan it, donate a dollar or few using PayPal or other payments system, and the vendor gives you you the paper. Altho let's think about this for a minute. It's still a news_paper_).

I suppose this would be also an opportunity to think about what happens to bottle and can deposits, but that's actually surprisingly cash free anyway. You pay for the groceries, more often than not with a payment card, then bring the empties to a redemption center in exchange for a slip of paper. They currently cash you out (not that I've ever seen this happen, since everyone seems to be like me and buy way more than they redeem), but could as easily transfer that balance to a reloadable card.

Bottle deposits really ought to be repriced anyway. 5c is ridiculous.

The answer to the post-cash begging question came up over on Freakonomics a couple years ago and they did not give a good answer.

As we have been discussing this, R. got to wondering why we didn't see any panhandling in A'dam; they've banned it, as has Rotterdam and Den Haag either just as or is about it, I forget which.

Humor about the possibilities: http://www.youtube.com/watch?v=PxpUjAuH5U4

I thought that people who might give a $10 or might give leftovers from a restaurant meal might be willing to hand out a prepaid card to McDonald's, or even a general purpose prepaid Visa. Someone did this in the interest of Science, or, er, Journalism:

A student panhandled and wrote a book about it; people gave him gift cards, among other things: