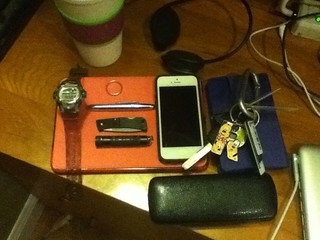 If you are not already aware, there is an entire genre of photo-blog devoted to Every Day Carry. Like selfies taken while riding a bike, they are kinda gear-head-y, but then I'm occasionally that way, too. In any event, I've been meaning to post this for a while, especially since my son got interested enough in the contents of my pockets to want to replicate them.

The pink thing is an iPad Mini. There is an iPhone on top of it, along with a Fenix E01, a Really Small Gerber knife and a Space Pen. The watch is a Casio Baby-G (I have three or so other watches that I wear, but this is the one I take with me when I travel and wear the same one for days on end). Above the pink thing are a re-usable cup, and a pair of Sennheiser bluetooth headphones (behind the neck style). To the right of the pink thing is a purple Big Skinny wallet (which does not do as good a job holding the iPhone 5 as it did the previous iPhone). On top of the wallet is a fake biner which contains the usual array of library card, rewards cards, etc., a car key, a house key and a big R with disney characters on it. Also, another light. Below the pink thing is a glasses case, containing a pair of sunglasses.

Oh, and there's a Men's Palladium 4mm, Size 10, but I am Not a Man. When I was recently vacationing with my sister, we compared hands and they are exactly the same size.

If I'm carrying a mini-bag, I won't have the iPad with me, the cup will likely sit in a cupholder (or be carried in my hand if walking). If I'm driving, the headphones probably aren't with me. If I'm walking, I'll bring a different key set. Usually -- sometimes I'll remove house keys-and-cards batch and bring that if I'm running errands on foot or bicycle. If I have a tote bag or backpack, there's another zippered pouch that contains a wider variety of useful items (aspiring, lip balm, ear plugs, other girl stuff). There is often a scrunchie in my hair or around a wrist, attached to the fake biner, etc. I wear a cap most of the summer, and it otherwise lives in the current tote or backpack. I've been trying really hard to rotate bags more often.

You may notice that there's a conspicuous lack of paper; that's intentional. I don't carry the pen to write on paper I'm walking around with; I carry the pen to write on things where I happen to find myself. In a pinch, I'll extract one of my Parent Cards (like a business card, if your business happened to be Being a Parent; useful for exchanging contact information at a playground or school event, in the unlikely event that the other party still doesn't own a smart phone. Increasingly useless) and write on the back of it. It's so nice having a pen, and not having to scrounge for one to sign a credit card slip.

The light is how I Stopped Stubbing My Toes and Running Into Things walking around the house at night. The knife (sssssh! Don't tell the Knife Fetishists!) is used to open boxes. It's a lockback knife, so I suppose in theory you could use it for Other Things, but if I needed to do something along those lines, I doubt I'd bother with something that small. I have specialized training and thus, other options.

As I coast through my mid-40s, I am staring at the prospect of needing to add reading glasses. I wear prescription already, and I am not optimistic about bifocals of any sort working for me; I'll probably fall down the stairs or something. It seems very likely that my EDC in my '50s will include two sets of additional glasses (one for sun and the other for reading), which implies that at some point, I'll decide I should just give in and buy Transitions, to reduce it back to two again.

The step from an regular iPad down to a mini involved a few months of using both. Eventually, I decided I actually kinda liked the smaller one, if only because it made me feel less stupid when I decided to bring it and the Paperwhite with me in a bag.
Collapse