By the time I was paying attention, in the early 70s, my paternal grandfather wasn't speaking very much: he'd had a series of strokes. He spoke English, definitely, and if I had given it any thought at all, I would have assumed he must have spoken Dutch because I knew he came from the Netherlands.

When I was a little older, my dad was telling stories about how we weren't _really_ Dutch, we were Frisian. What, precisely, that might have meant never developed into anything particular in my brain, at least.

When I was considerably older, my aunt went to visit her cousins in the Netherlands and then some years later, I went as well. The cousins do indeed live in Friesland and they do indeed speak some Fries/Frisian/Frysk, also Dutch, English and whatever other additional languages they learned along the way (French and German being fairly common). If you're thinking geez, well, yeah. I'm clearly a weak link in the chain.

On this most recent visit, however, I learned from A. that our mutual cousin J. (one of J.'s kids) told a story about how my grandfather's (and A.'s father's) family went to Germany for some years. Well, _that's_ a new development. I looked around in Tresoar's notarial records, and found a string of notarized debts by my great-grandfather (A.'s grandfather). My cousin D. told me that Aebe or Ybe (the ggfather in question) had "lost the farm to gambling" or something along those lines, and I did indeed find Aebe selling the farm in 1898, when my grandfather would have been 2 years old.

The next appearance of Aebe in the notarial records is 1907. So there is a plausible absence from Friesland for Aebe (and, one assumes, his family) that could be readily explained by emigration to Germany. But where in Germany? The story goes that Aebe learned to play violin (taught himself) and skipped out on farm work to practice and/or protect his hands. Once in Germany, he was running a pub or hostelry of some sort (with his wife doing all the hard work and raising the young family), playing the violin for the customers and generally having a good life. It's pretty easy to see this all coming to a crashing, er, halt in the global financial crisis of 1907, sending Aebe and his now somewhat older family back to Friesland where their extended family and kinship connections could provide assistance.

The day after I heard this story, I thought to ask A., "Where in Germany?", but the story did not include that detail. After all, it had been carefully concealed from younger generations in one family, preserved among cousins as a Don't Be Like Them tale. I immediately thought, I bet they went to Friesland in Germany (East Frisia), because that'd be an easier step than dealing with Hochdeutsch.

So the next step was to see if I could get any kind of access to the residence records that I know Germany has kept for a while. I did not think there had been any births/marriages/deaths while Aebe's family was in Germany, because I thought I had everyone accounted for in the Dutch Civil Registry. I have not succeeded thus far. I also took a look around Amazon for guides to doing German genealogy (so far, I haven't been that interested, because all the German connections were pretty distant in time and my tree). Then I started googling around. I found a guy in Iowa who is a specialist in migration from East Frisia to the United States and wrote him a letter (it'll go out in the mail on Monday), because it occurred to me that the timeline and history suggested that my grandfather and great-uncle may have emigrated not as a part of a Frisian group, but as part of the East Frisian migration (thus explaining why they didn't end up in Michigan).

And I found this in Google Books. Johnson's Universal Cyclopedia, a New Edition, Volume 3, pp 601-2. Under "Modern West Frisian".

"As to the dialects of the towns Leeuwarden, Bolsward, Sneek, Harlingen, Franeker, Dokkum, and of "Het Bildt" (the district along the northwestern coast of the province of Friesland), the name of "Platt-Frisian" (i.e. "Plattdeutsch"-Frisian, Low German Frisian), or "Town-Frisian" (Stadfriesch), is generally assigned: it ought to be said that the "Town-Frisian" is not to be counted among Frisian, the idiom of the towns in question being a Low Saxon dialect, which replaced the former Frisian language and kept only a comparatively small number of Frisian words and peculiarities."

The story so far: Grampa is born in 1896 in Achlum, Friesland, the Netherlands. He might speak Dutch. He might speak Frisian. He might speak whatever that cyclopedia is talking about. He might not speak at all, given my family history of late speech. Perhaps the family goes to Germany, perhaps to somewhere in East Frisia, where they then may well speak another form of Frisian or another form of Plattdeutsch. And then they come back, and in 1914, at 17 or 18, he comes to the United States.

No wonder he typed English when he wrote to his Dutch relatives back home in the 1970s.

We ran errands, including going to Staples. I wanted a bunch of tab dividers for a binder, which I may return to in a later (possibly locked) post (depending on just how much of my own manic hyper-controlliness I feel like exposing to the world). While there: oooh! Look! Backpacks. T., ya wanna backpack?

No. Yes. That one -- which had a bug Lego Star Wars Darth Vader on it. But behind that was an Angry Birds Star Wars one with a Darth Vader on it. Heh heh heh, says Vader when you lose a level. I tried to talk T. into that one. We looked at all the backpacks; he went for it.

Tab dividers, but wait! Oooh, pencil cases. Don't really need one of those. A portable 3 hole punch! Super cool -- didn't know those existed. Talked myself out of that. Bienfang spiral sketch pads -- gotta get more of those. Magnetic locker clips! Sweet! And on and on. I _did_ manage to get the tab dividers, but I didn't leave with a sub $10 item. I spent over $150 at Staples, half of which went to the Logitech Mini Bluetooth keyboard.

Once home, we played games and I read a little more of _How We Think_. I'm increasingly convinced this is a terrible book, but it slides along so quickly it's hard to get mad and stop to think about it and then STOP, so it may be a while before I call bullshit and quit reading. M. came over to visit. Yesterday she went to Nash Dinosaur Tracks and a Dinosaur related state park in Connecticut, if I understood her correctly (I may not have). I was reading the news and saw more headlines about tall people getting more cancer. I wonder if dinosaurs got cancer? Yes! They did! For sure bone and brain; for obvious reasons there are some limitations in our ability to detect other cancers in dinosaurs.

And that's pretty much what my brain has been like today: a hyper ferret learning to ice skate, basically.

R. got me a Logitech keyboard for iPad ... a while back. I have not used it a lot, but it's been handy for when I wanted to write longer pieces on vacation, when I don't have my laptop with me, just the iPad. When I saw they made a teeny tiny keyboard for the mini, I picked it up, on the premise that the resulting combination might make a usable micro-laptop that fit into a medium sized handbag (still need either a large handbag or a backpack for the iPad with or without the keyboard. I typically carry a Timbuk2 Candybar).

Here's the Mini in the two-piece case, the way I normally have it. Also in the picture are the keyboard and, for reference purposes, an original iPad in a beefy case. 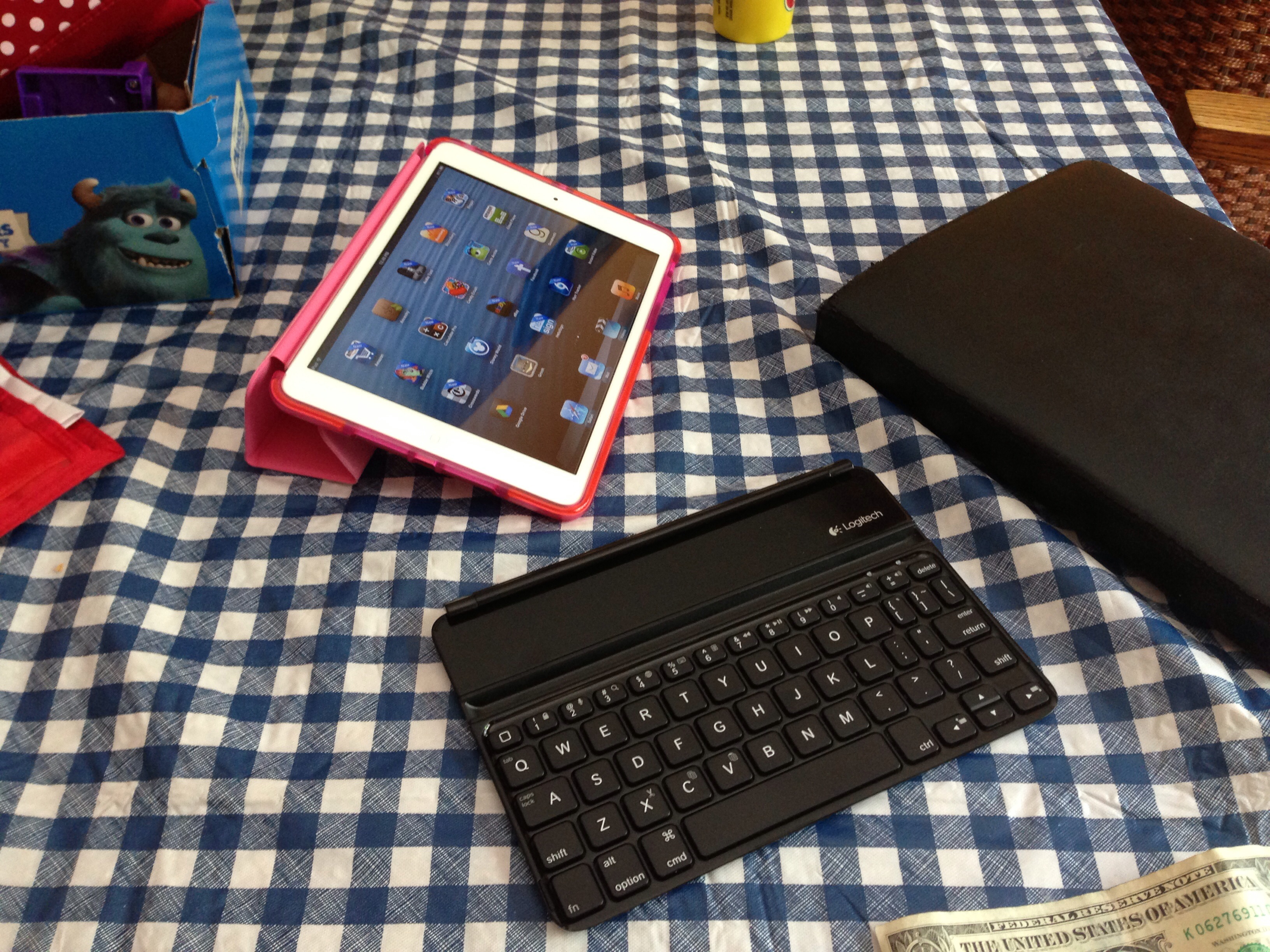 Here's the Mini with the keyboard attached (alas, both parts of the case must be removed; I was hoping the impact portion could stay, but it can't). A dollar bill is included for scale. 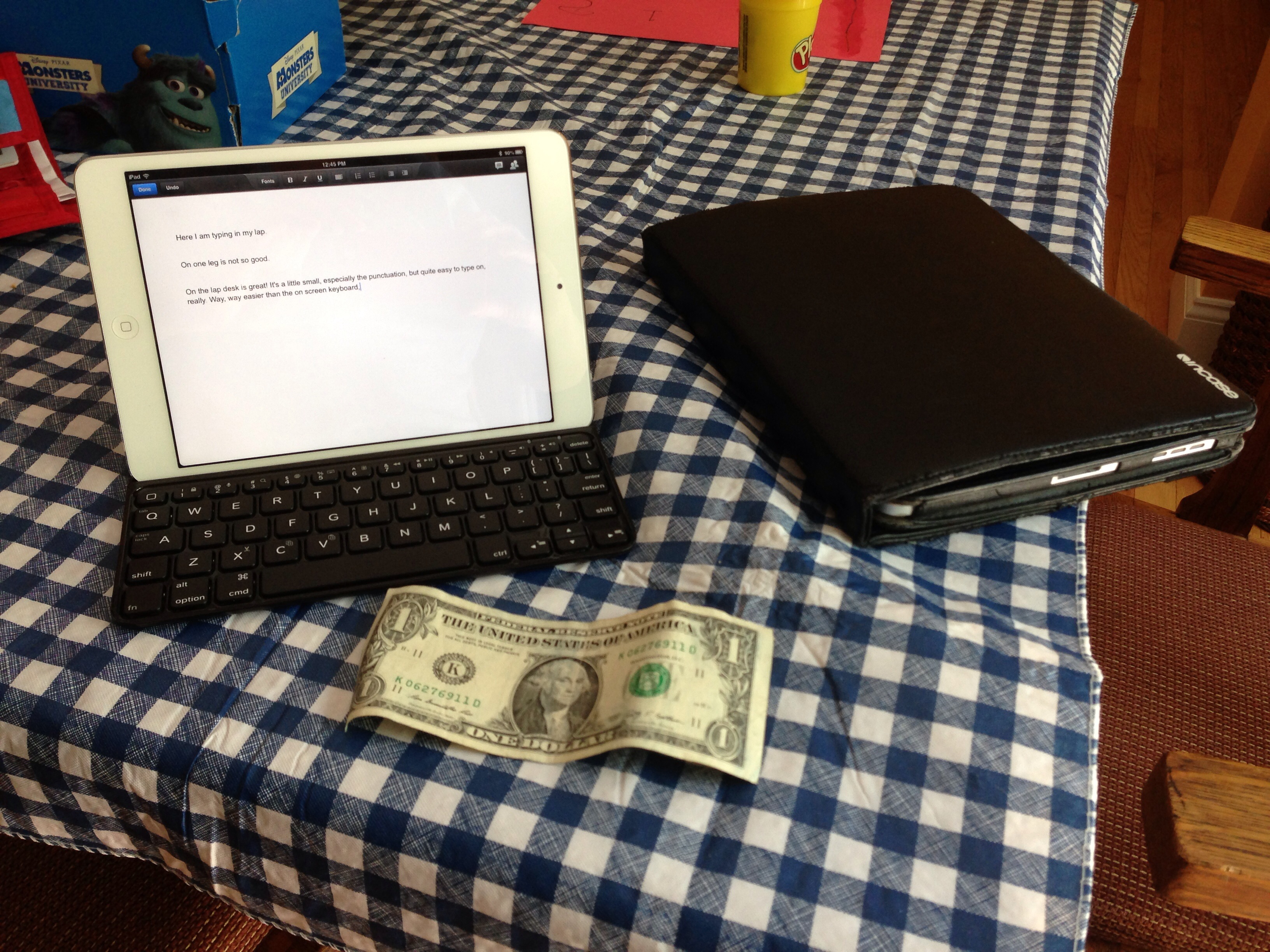 As with its older and bigger sibling, the iPad mini fits into a slot on the keyboard. The connectivity is via bluetooth and I expect the power consumption to be quite minimal, judging by its predecessor (if it isn't, I would assume a flaw in the one I got, not a design flaw). The punctuation keys are very tiny, even compared to the letter keys. I understand the design tradeoff involved and endorse it, but it can be a little bit of a problem typing.

As people have observed with netbooks and similar, small, keyboarded setups such as this one, they don't straddle the legs quite as stably as a classic laptop. Alas, this thing wobbles a lot when balanced on just one leg. It works fine on a table, or a lapdesk, so as an airline option it should work great with the tray, or more generally on an armrest (altho you'd get a heck of a crick in your back after a while).

I'll update this if/when I travel with it and attempt to write anything substantial with it. I'm typing this on my laptop. ;-)

ETA: For a much higher quality review, produced in context with reviews of competing products, see: