I had such a nice routine going during the regular school term. Get the kids off to school. Take care of a few things around the house. Walk with my friend M., and then visit for a bit. Talk to my friend R. Have lunch, tackle something that might take a couple hours. Kids start arriving home.

As a result of unusual activities on my side and others (Thursday morning visit and lunch with H., Friday at Readercon, M. got a haircut on Monday, I had a school meeting today), and the new school session, I just cannot seem to get back into a groove. That plus everything requiring a half dozen e-mails/text messages/phone calls to reschedule, which I just don't do well with.

In the meantime, I'm catching up on what I can, and trying not to go completely nuts. It was super easy getting through the backlog of snail mail -- but catching up on what was in my email was significantly more work. There's a certain amount of underlying commitments and I just moved it from paper to electronic. Ah, well.

In today's useless email, Honda wants to tell me about the 2014 Odyssey Touring edition, which has a built in vacuum system. _Really_. I have to say, I think Honda pays an amazing amount of attention to the desires, stated and otherwise, of their customers. I just don't necessarily want the Touring Edition. But that built in vac? Tempting. Very, very tempting. I wonder how loud it is.

I'm not the first person.

ETA: Worked for me. I don't have it set to delete photos automagically (don't know how, honestly), so no worries. Kind of a missing feature, not being able to edit the upload queue. You can _see_ the upload queue, so presumably they will eventually add an edit feature?

Once upon a time, I had a pocket sized zip planner. It was pretty awesome; I probably had it for most of a decade. It was grey. It went with me everywhere. I don't remember precisely what I did before that -- this was a post-college, probably a post-divorce thing. I think I got it _because_ I had to keep track of stuff related to the divorce process, and it was more detailed longer term planning than I had done to that point, and it wouldn't stick in my head.

I eventually got sucked into the world of PDAs (no, not making out in public); I think I bought a Treo rather than a Palm Pilot. I definitely was not an early adopter. I was one of the last people in my social circle to use a PDA. And I stuck with Treos, eventually buying a Treo phone, and then a Treo not-a-phone but with wireless networking as the last gasp around 2003 or 2004. I even bought map software to put on it.

Then there's another gap in useful scheduling stuff, because I had some failures with the Treos. When I needed to start maintaining a calendar again, I went back to paper, and my address book became a disaster that did not recover until I finally got an iPhone. That finally got fixed when I blasted through hundreds of old e-mails in my inbox, because that was the only really safe place to store anything. *shudder*

But I'm still on a paper calendar, in the futile hope that if I write stuff there, people will read it. It doesn't actually work. But that's okay. R. suggested google calendar, and I kept having weird failures with it, so I'm now setting up iOS, which lets you share the calendar across devices and with other people. I'll return at some point in the future with a meaningful review of what it's like to live with that. In the meantime, I'm running a parallel system through the end of the year (paper and iOS). I still have to migrate a few things out of google calendar and onto the iOS calendar (discovered that with the gymnastics reschedule today). But I'm getting there.

Here's a picture of what the family calendar and message board look like. It's really functional for me, and marginally functional for other people. Which is Not Good Enough. We're going to move it all electronic, probably by the end of the year, if I can manage to figure out a combination of things that are bullet proof and me-proof. Idiot proof is not enough -- I do unexpected things, and unexpected things cannot be allowed to break my life.

[Friends and family only to view it; I seem unable to figure out what resolution will be available to public viewers and I'm not sure I want to share that much of my life with anyone I don't know really well.]

The current issue is that part of my tickler system is _on_ the paper calendar, but associated with the months rather than particular days. I've migrated the future year stuff from December to the vacation binder, but that leaves all the within-the-year reminders (mostly ADRs and plane tickets and stuff related to Disney), which probably should also move into the vacation binder, and one additional binder if necessary (that would probably be for scheduling the kids' physicals and things of that nature).

If this works, it'll be really weird not having anything on that wall. Virtual family organization should work very well, but may be disorienting to anyone trying to figure out how our life works. OTOH, it should ultimately be profoundly shareable and thus inclusive. 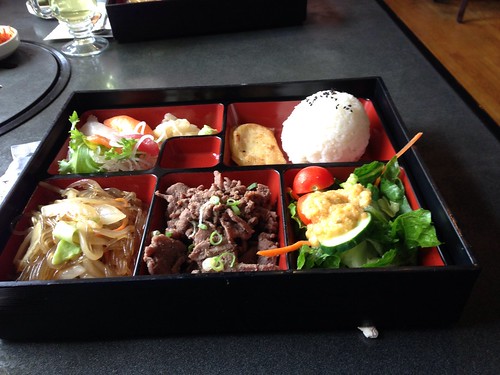 Testing flickr->LJ posting with a picture of H.'s lovely lunch at Koreana from last Thursday.