Ambassador Rice was on the Daily Show last night. Her jacket is fabulously tailored and beautiful in every way (in part because she is a lovely, articulate, funny woman, incredibly competent, etc.). I don't aspire to rocking that jacket, but I'd _love_ to get some of that fabric.

Not sure what I'd do with it, but it is gorgeous. Any ideas how to track it down?

I don't think the Vlisco ready-to-wear line is actually available yet, altho I could be wrong. I'm going to keep digging around. Even if it is, odds on it won't be in my size -- or for sale on my continent.

I only just now noticed what the kids are standing in front of here. I was staring harder than usual trying to see if I could figure out who was who in the photo. It isn't particularly well-focused.

And then all those cobs started distracting me. 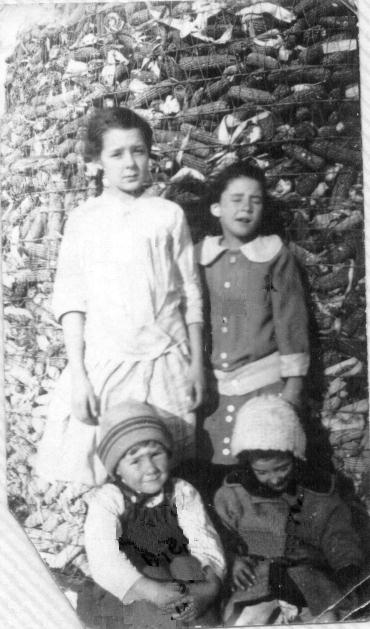 FWIW, my grandmother (the nutty one) is the bottom right. Her brother Eugene is sitting next to her -- he died in 1920. Standing are Pearl and Ruth (left and right). The two oldest boys are not in the picture, probably because Elmer had already run off to participate in The Great War (he was too young, but that did not stop him; the US Army wouldn't take him, but the Australians would). I don't know where Iven was. Possibly taking the picture?
Collapse